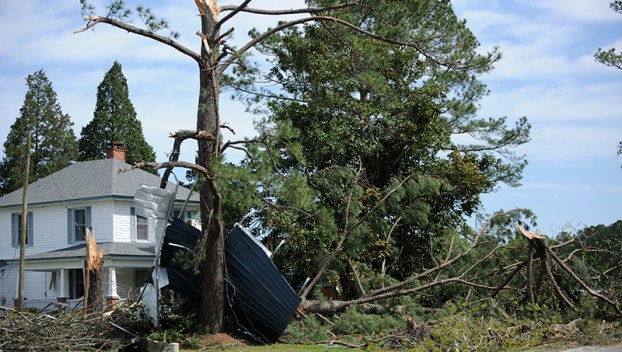 PATH OF DESTRUCTION: An April 25, 2014, tornado tore a path of destruction across Beaufort County, including Douglas Crossroads (pictured). March to May is prime tornado season in eastern North Carolina. (Vail Stewart Rumley/Daily News)

Yes, there is a ‘Carolina Alley’

When asked to associate a state with tornadoes, what’s the first state that comes to mind?

Kansas? Oklahoma? You wouldn’t be wrong, as these states are two of the three (Nebraska is the third) known as “Tornado Alley.”

North Carolina might not rank high in this association game, but it should. Weather researchers have discovered that there’s more than one “Tornado Alley” in the U.S. In fact, “Dixie Alley,” from northern Louisiana across parts of Arkansas, Mississippi, Alabama and Tennessee, actually sees more EF-3 to EF-5 tornadoes every year than “Tornado Alley.” “Hoosier Alley,” encompassing Indiana and parts of Illinois and Kentucky, has the third most-active tornado area in the country.

Fourth on that list is “Carolina Alley,” a narrow corridor that follows I-95 from northeastern South Carolina across North Carolina. Beaufort County, while technically not in the alley itself, is just to the east of it.

Many people might remember the outbreak of tornadoes in 1984. Fifty-seven people died in North and South Carolina on March 28 of that year. Forty-two of them died in North Carolina — 16 of those in Pitt County. More recently, 24 people died on April 16, 2011, when 30 tornadoes swept across “Carolina Alley.” And on April 25, 2014, an EF-3 tornado tore a path of destruction from Chocowinity across the Pamlico River, through Washington Park and on to Pinetown. No one died on that day, but an elderly woman who was thrown from her home after a direct hit never recovered. She died weeks later.

Tornados in Beaufort County should not be taken lightly, and March to May is prime tornado season.

Pay attention to tornado watches: this means conditions are right for tornado formation.

Pay attention to tornado warnings: this means a tornado has actually been spotted.

Pay attention to the danger signs: a dark, often greenish sky; a large, dark, low-lying cloud; a loud roar (like a freight train); and if there is a watch or warning posted and hail begins to fall — that’s a real danger sign.

Plan ahead and know where to go. The safest place is a basement; an inner hallway or small room without windows is the next best choice. Mobile homes are not safe. Vehicles are not safe. A better option than a mobile home or vehicle is lying down on flat ground with arms covering your head (a ditch is even better).

And your best option is to subscribe to Hyper-Reach, the county’s alert system. Tornados give little notice, but Hyper-Reach will tell you whether your home is in the direct path of one and might just give you time to find a safe space.

“Carolina Alley” is real. Make sure you and your loved ones are prepared to weather the storm.

Register with Hyper-Reach by visiting the county’s website at www.co.beaufort.nc.us. Scroll down on the homepage to find the Hyper-Reach link on the right.