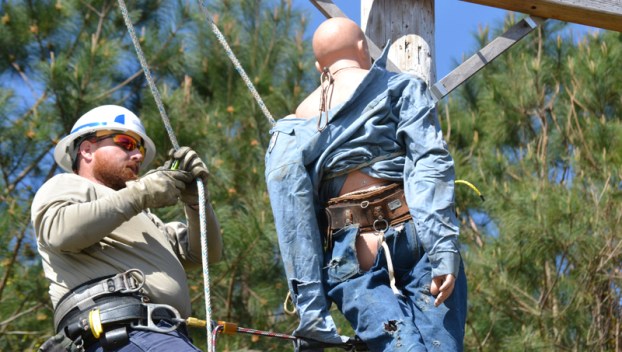 TO THE RESCUE: Washington Electric Utilities lineman Russell Seymour practices his rescue technique with a training dummy at the electric service’s training grounds on Thursday. Seymour was one of three linemen to represent Washington and New Bern in a national lineman competition in Colorado Springs last week. (Matt Debnam/Daily News)

For an electric line worker, it’s a worst-case scenario — a lineman is electrocuted while working on top of a power pole. He could stop breathing. His heart might stop. Quick action becomes crucial in determining whether he lives or dies.

For the line workers at Washington Electric Utilities, preparing for that worst-case scenario is a yearly event. On Thursday, line workers spent the morning practicing hurt-man rescue techniques. Their objective was to get a dummy down from the top of a power pole or bucket lift as quickly and as safely as possible.

“We do this every year to certify our guys,” WEU interim Director Alston Tankard said. “It’s a scenario where if we’re in a backyard and a guy’s got to climb a pole, we’ve got another climber there in case something happens.”

Once they recover the injured person, Tankard says that all Washington linemen are certified in first aid, CPR and the use of an automated defibrillator that rides along on every job.

“Most of the time, we work (lines) dead, but you never know,” Tankard said. “They don’t necessarily have to be electrocuted. A man could have a heart attack, or get a cramp in his leg — anything that compromises him coming back down a pole.”

During the training, linemen took turns shimmying up poles with climbing spurs and harnesses in an attempt to rescue a training dummy suspended at the top. To make things a little more interesting, the group brought a little competition into the mix, seeing who could make the fastest rescue.

For some of the guys, the competition gets pretty serious.

“The best analogy I use for it is it’s like being in NASCAR,” Seymour said. “Not everybody can do that.”

This May, Washington linemen will also be on hand at the North Carolina Association of Municipal Electric Systems Conference for a similar competition. Events include hurt-man rescue, fuse change out and cross arm change outs.

“Everybody across the state comes together at a location and competes against each other to see who can do it the fastest,” Tankard said.

March 26 was the great reveal. Downstairs at 183 W. Main St. in Washington, Copper Canyon Wellness did a quiet,... read more