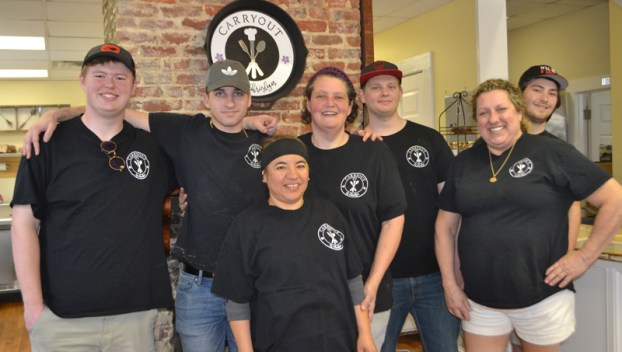 Chrislyn Wedderien of Carryout by Chrislyn and her staff celebrated being awarded the Governor's Volunteer Medallion Award in 2019.

Since Hurricane Florence devastated eastern North Carolina last September, the staff at Carryout by Chrislyn have provided a grand total of 13,081 meals to both hurricane victims and responders throughout the state.

Actually, make that 13,261 — the restaurant provided another 180 meals at a dinner in Carteret County on Friday evening, and Chrislyn Wedderien and her staff are receiving attention from the highest levels of North Carolina government.

On Friday, the news went public that Wedderien has been selected as one of the top volunteers in the state, and will travel to Raleigh in May to receive the Governor’s Medallion Award for Volunteer Service.

“So many of us felt helpless during that time,” Wedderien said. “I know for myself I wasn’t going to go into high waters and rescue people and dogs. That’s not in my scope. But I knew I could provide meals.”

And provide meals she did. With the hard work of her staff and the assistance of an estimated 500 volunteers statewide, the meals made at this one Washington business were able to touch lives across the state during a time of tremendous need.

“The most satisfying part of it was all the stories coming back from places like Otway and Engelhard where the American Red Cross and Salvation Army couldn’t get in,” Wedderien said. “It was the first hot meal they had in four or five days.”

While it took many hands to deliver those meals, it also took dollars — a Gofundme account and an overall community fundraising effort allowed the restaurant to continue its mission of delivering meals to those impacted by Florence. While that Gofundme has since closed down, Wedderien confirmed that the fundraiser brought in enough money to help start the process again during whatever disaster comes next.

Wedderien will be honored at the North Carolina State Capitol on May 6, along with approximately 20 other volunteers from across the state.

“I wanted to wear the chef coat, but I was vetoed on that,” Wedderien laughed.

County declines bids from those owing back taxes

Those in the market for county-owned property will no longer be able to bid if they owe the county back... read more