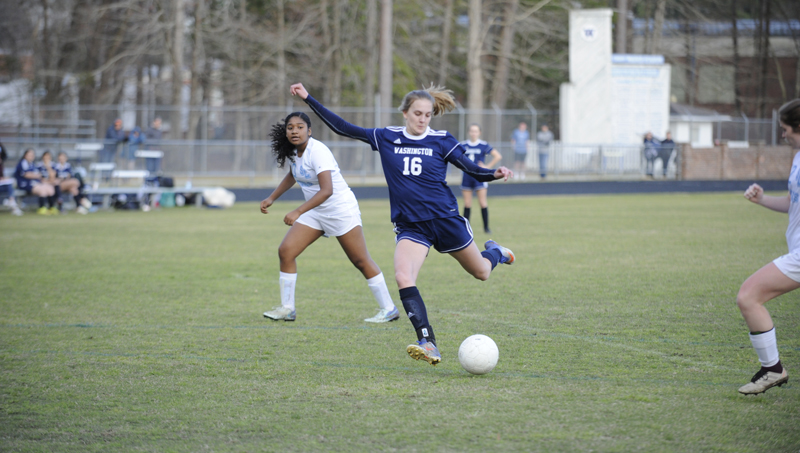 LOADING UP: Washington midfielder Claire Shepherd tees up a shot at the edge of the penalty area that resulted in a goal against South Lenoir earlier this year. The senior found herself on the scoresheet again yesterday, bagging a goal in Washington’s 10-1 win over Greene Central. (Sean Finnerty | Daily News)

SNOW HILL — It was another dominant performance from the Washington girls soccer team last night. The Pam Pack came away with a 10-1 conference win over Greene Central on the road and kept its spot at the top of the 2A Eastern Carolina Conference. The Rams started the game off on a very positive note, but the Pam Pack settled in and scored many goals throughout the night.

Washington (7-3, 4-0 2A ECC) found itself searching for answers early after conceding a goal in the first few minutes. The Pam Pack received some help after Greene Central (5-6-2, 2-3 2A ECC) midfielder Kelly Acevedo was given a red card midway through the first half. Washington responded by scoring three goals in the first half to take a 3-1 lead into the halftime break.

Then the floodgates opened for the Pam Pack when play resumed. While the Rams had some really good chances to score, they weren’t able to contain Washington’s attack in the second half. Once again, it was attacking midfielder Lilly Frances Lobos who led the charge, scoring five goals and adding an assist as well. The sophomore now has 36 goals and 11 assists in 10 games for the Pam Pack and leads the conference in both categories.

“The passing was great,” Washington head coach Ed Rodriguez said of his team’s performance. “Our defense was well improved, except for the goal we conceded at the beginning of the game. It takes time to develop connections and we’re stringing together a lot of passes. I think we started slow, but we really turned it on late in the match. We’re starting to come together at the right time and that’s a really good thing. Teamwork, working the ball around and playing our game will help up set the tone in future matches.”

Lobos has been scoring in bunches all season, but she wasn’t the only Washington player who had a scoring barrage yesterday. Forward Alyssa Villegas scored two of her three goals in the second half to go along with two assists. Winger Rebecca Zerniak notched a goal and three assists and defensive midfielder Claire Shepherd also scored for the Pam Pack.

“It’s been motivation,” Villegas said about her recent form. “My parents and friends told me I had the potential to this. I didn’t have a lot of confidence in myself at the start, but my teammates kept me motivated. Over the last few games, the results have shown my progression throughout the season. As long as we bring our best effort as a team, we should be fine going forward. Our communication was really good, especially in the second half.”

Washington will take a break from conference play for its next game on Monday, when it hosts Edenton at 5 p.m.