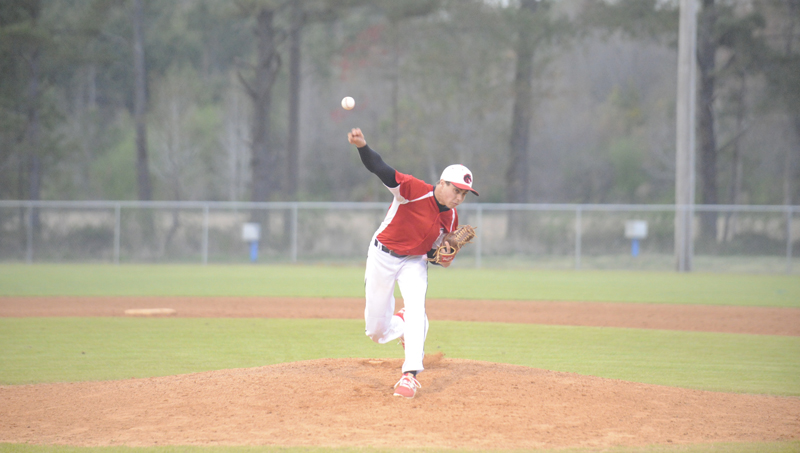 WILLIAMSTON — Establishing the baseball program for the Eastern Christian HomeSchool (TEACH) has been a slow and steady journey for head coach Donell Albritton and his Trailblazers. Battling the stigma of being comprised of homeschooled players and not belonging to a conference — and thus ineligible for a postseason tournament — TEACH has shown improvement every year under Albritton’s watch. And after an 8-1 start to this season, the Trailblazers’ hard work was recognized as they earned the No. 70th spot in MaxPreps’ state rankings.

With the constant drive to make a name for itself, TEACH jumped at the chance to play Bear Grass, the No. 4-ranked 1A team in the state, on the road last night after the Trailblazers’ original opponent backed out on late notice. TEACH ended up falling to Bear Grass, 4-0, after the Bears’ pitching proved to be too much for the Trailblazers and some defensive mistakes here and there spoiled a solid performance from freshman starting pitcher Ryan Ange.

Knowing how far TEACH (10-2) has come since he became head coach in 2015, Albritton was thrilled with how his team — which had five freshmen and an eighth grader starting yesterday — fared against the Bears (12-1, 5-0 1A Atlantic 5 Conference).

“I’m tickled to death. We wanted to come out here and compete and we did,” Albritton said. “Just couldn’t get the bats going; the bats have been strong for us all year. But we got a great job from Ryan (Ange) on the mound. I was telling the guys, ‘You look at the scoreboard, we didn’t get a hit, had four errors and we’re only down 4-0 to the No. 4 (1A) team in the state.’ That’s just a testament to the program and to them boys. I’m pleased with where we’re at as a program.”

Ange was the strong point for the Trailblazers on the night. He allowed five hits across the first five innings, striking out four Bears and surrendering three unearned runs. Ange finally ran out of gas in the sixth, giving up three hits to load the bases, before being relieved by fellow freshman Preston Kennedy and moving to shortstop where Kennedy was playing before the switch.

Bear Grass first got on the scoreboard in the bottom of the first. Tanner Lyle reached first on an infield single and advanced to third on a Lelon Stotesberry base hit. A passed ball allowed Lyle to score and moved Stotesberry to third, but Ange got the next two batters to ground out to limit the damage done.

The Bears made it 2-0 in the third after Joseph Perry led off by drawing a walk. The Bear Grass catcher then stole second and third, before reaching home on a passed ball. The home team pushed its lead to three runs in the fourth. After the Bears hit singles in two of its first three at-bats of the inning to put runners on the corners, a TEACH error on a high pop-up allowed the ball to drop on the edge of the infield and load the bases. A groundout to second base then drove a run home for the Bears, but Ange got the next batter to lineout to Kennedy at shortstop to prevent any more runs. Bear Grass scored its final run in the sixth when Kennedy inherited a bases-loaded situation after relieving Ange and Stotesberry hit an RBI-single to left field.

Not recording a hit all game, the Trailblazers came closest to scoring in the second inning. With two outs already, Kennedy drew a walk. Jacob Whitesell, another Trailblazer freshman, followed with a groundball to the Bears’ shortstop. The throw to first sailed over the first baseman’s head, moving Kennedy to third and Whitesell to second. But unfortunately for the Trailblazers, they couldn’t capitalize, as a strikeout the next at-bat ended the inning.

After the game, Albritton expressed gratitude for the chance Bear Grass head coach Terry Perry gave the Trailblazers by accommodating them at the last minute and inviting them out to play. Albritton said, as one of the highest ranked teams in the state, they “didn’t have to play a homeschool team” and “it means everything to this program,” even if TEACH couldn’t get the win it was aiming for.

As a team that’s continually looking to improve and build on its success, playing challenging opponents like Bear Grass is important for TEACH’s progress, as it gives the team a chance to see quality competition and better prepare for future opponents.

“We’ve got a tough stretch coming up,” Albritton said. “We’re going down to Wilson for the Golden Leaf Easter Tournament where we’ll be playing some high-caliber teams, and this was great for the guys to see that arm, and it’s a chance for us to see some quality arms because we don’t get to always see quality arms. Into our stretch run, because we’ve got three games a week from here on out, it meant a lot to us.”