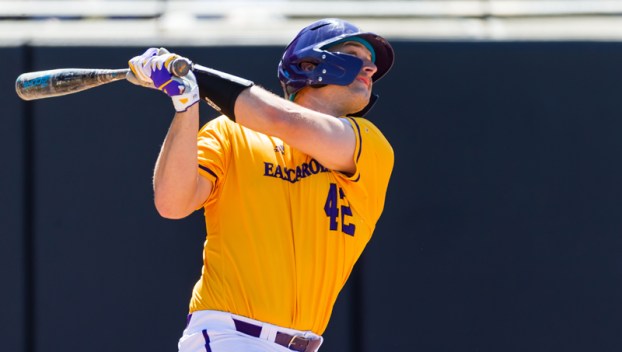 SLUGGING AWAY: Spencer Brickhouse was an offensive sparkplug for ECU in the Pirates’ pair of wins on Saturday over Houston. Brickhouse accounted for four hits, including two home runs, and seven RBIs in the Pirates’ doubleheader sweep. (ECU Athletic Media Relations)

HOUSTON —East Carolina won its third series in as many attempts in American Athletic Conference play over the weekend after sweeping Saturday’s doubleheader at Houston. The 15-3 and 3-1 victories over the Cougars on Saturday came after a 2-0 series-opening loss on Friday that snapped the Pirates’ 10-game win streak.

In ECU’s 3-1 win in game two of the doubleheader — which resulted in ECU’s first series win in Houston since 2011 — the Pirates (24-7, 8-1 AAC) were being blanked late into the contest — just like the series opener — before Jake Washer tied the game at one with a solo home run to left field in the top of the seventh. Three at-bats later, Ryder Giles drove in the game-winning run with a RBI-single. The play scored Brady Lloyd, who got on first earlier in the inning with a hit up the middle and advanced to second on Seth Caddell’s groundout. Spencer Brickhouse also added an insurance run in the eighth with a RBI-single that scored Turner Brown.

Joe Davis scored the sole run for Houston (17-15, 3-6 AAC), a solo home run to left field with two outs in the bottom of the first, off of ECU starter Jake Kuchmaner. However, the Cougars, despite picking up five more hits in the game, didn’t plate any more runs.

ECU relief pitcher Evan Voliva earned his fourth win of the season after pitching 1.1 innings, allowing just one hit and picking up three strikeouts. Kuchmaner went 5.1 innings and allowed just one run on four hits and struck out seven batters. Although pitching long enough to earn a decision, he could not win with the Pirates trailing as he exited the game.

The first game of the doubleheader was when ECU went on a scoring spree, as it crossed home plate 15 times on 14 hits en route to a 15-3 beatdown. Brown went 4-for-6 with one run and one RBI, while Brickhouse went 3-for-4 in the game with two runs and six RBIs and Washer went 2-for-4 with two runs of his own and three RBIs to lead the offense in the game.

ECU plated multiple runs in four separate innings, including four runs in both the sixth and eighth innings. Brickhouse contributed early with a two-run home run in the top of the first, and Alec Burleson scored the third run of the inning for the Pirates, reaching home thanks to a Cougar error that allowed Thomas Francisco to reach base and keep the inning alive.

Although Bryant Packard hit into a double play in the following inning, Washer scored from second to extend ECU’s lead to 4-0. However, it went quiet across the next three innings, as the Pirates didn’t score a run, and in turn allowed Houston to score two runs of its own. Brickhouse turned the noise meter back up with his first career grand slam in the sixth inning to account for the four runs in that frame. This was ECU’s third grand slam in the past five games.

The Pirates’ six-run advantage didn’t last long as Washer hit a two-run homer in the seventh to extend the lead to eight runs, and four different Pirates hit an RBI-single in the eighth before Brady Lloyd’s bases-loaded walk in the ninth capped off the scoring. ECU is now 15-0 on the season when its hit total reaches double digits.

The Pirates looked like Jekyll and Hyde from Friday to Saturday as only three players mustered hits in the five-hit shutout loss in the series opener. Packard and Lloyd each had two hits while Brickhouse added another as ECU stranded seven runners on base in the 2-0 loss.

Cougar starter Lael Lockhart Jr. pitched a career-high 7.2 shutout innings with four hits before Fred Villarreal stepped onto the mound to earn the save. Pirate starter Jake Agnos took his second loss of the season in his 5.2 innings pitched after giving up two runs — one earned — on six hits and striking out out eight Cougars.

Houston scored the game-winning run in the bottom of the first after Lloyd’s throwing error from second — his fourth error of the season — allowed Jared Triolo to score from third. Triolo also did the work for the Cougars in the fourth inning, hitting a solo home run.

ECU has won 12 of its last 13 games and will face against another in-state rival this week when it travels to take on UNC-Wilmington tomorrow at 6 p.m.

Reduced rates for spay/neuter in February

From the Humane Society of Beaufort County During the month of February our local veterinarian hospitals will conduct spaying and... read more