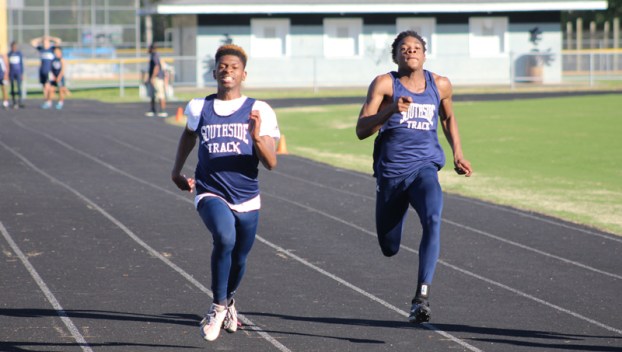 PINETOWN — Northside and Southside competed in a four-team 1A Coastal Plains Conference track meet hosted by the Panthers yesterday afternoon that Jones Senior and Pamlico County attended as well. Similar to last week’s meet at Northside, Southside’s girls and boys track teams both picked up wins, continuing the good form the Seahawks have shown over the last couple of weeks.

For the girls, Southside scored 94 points to take first place. Northside finished second with 80 points, followed by the Trojans with 41 points and Pamlico County (17). On the boys’ side, the Seahawks won first place with a score of 131. Pamlico County placed second with 55 points and Northside finished third with 36 points. Jones Senior finished in fourth place, scoring 23 points on the afternoon.

The Seahawks’ successful day was powered by plenty of first-place finishes in the individual events. Among the boys, Southside’s Richard Shavender swept the hurdles events, winning the 110-meter hurdles in 18.2 seconds and taking first in the 300 hurdles with a time of 44.52. Another Seahawk winner, Aeron Wright outpaced the competition in the 100, placing first with a time of 10.98. The Southside boys’ success also came in the field events. Hunter Tyler won the triple jump with a distance of 37-3 and teammate Davion McGraw won the shot put with a throw of 40-2.

“We’re struggling with injuries,” said Seahawks head coach Andrea Quinerly. “We’ve had to experiment with athletes in other events because of that. On the track, I think we were OK today, but I think we can be better going forward. The weather hasn’t been kind, so we haven’t been able to get many meets in. I’m hoping we can get a small meet in on Friday to make up one, but my team is improving.”

Competing at home, the Panthers won some events of their own, as well. On the boys’ side, Chandler Nimons won the discus with a throw of 111-10. The Lady Panthers experienced some more success, evidenced by their second-place finish. Danyell Hicks won two events, taking first in both the triple jump (34-9) and 300 hurdles (52.59), while Katie Hopkins won the discus with a throw of 79-3. Sierra Johnson won the high jump, clearing 4-8, and Panthers head coach Bob Girani highlighted her hard work during the meet.

“She’s (Sierra Johnson) done really well,” Girani said. “I coached her sister (Caitlyn Johnson) for four years here. Sierra is following in her footsteps and I’ve seen a lot of improvement from her this season. I’ve seen a lot of my team improve their times from our last meet. Getting some of our kids to qualify for regionals and states is a really good thing. I’m impressed with our progress, but we need to keep going.”

Northside returns to the track next Wednesday at Pamlico County with Jones Senior and Tarboro also attending, while Southside is scheduled to host Riverside and South Creek for the Seahawks’ Senior Night the same day. With the 1A CPC Championship meet creeping closer and closer — scheduled for May 2 — the Panthers and Seahawks will be looking to improve as the postseason approaches.

CHOCOWINITY — When Southside and Tarboro met earlier this season at Tarboro, the Seahawks came away with a commanding 14-0... read more