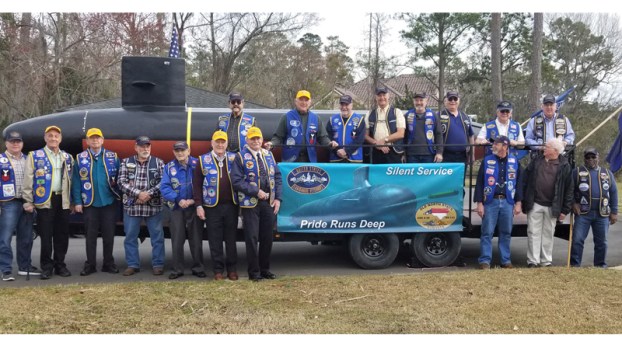 It’s not every day that a submarine shows up in Beaufort County, but that’s exactly what happened last month at Pamlico Plantation, as a group of submarine veterans from across the state gathered on the shores of the Pamlico for a special ceremony.

As to how the vessel arrived in our area, Pamlico Plantation resident Dennis Cloutier shares the story. Throughout North Carolina, seven organizations, called bases, serve as meeting place for those who have served as submariners in the U.S. Navy. Cloutier himself is a member of the Roanoke Rapids-based Old North State Base.

“It’s just like any veterans group,” Cloutier said. “We get together monthly for meetings, and our creed is to provide community assistance and have a presence in the community.”

That desire to be a community presence was the impetus behind the construction of the submarine. Christened the USS Bass SSN 677, the submarine will be the centerpiece of the group’s float, which will be displayed during parades and other civic functions.

Built over the course of nine months, the sub is constructed of heavy-duty cardboard concrete form, overlaid with fiberglass and paint. To mark the completion of the project, the ONS base held a ceremonial launching for their submarine in March.

Prior to launch, a chaplain offered a prayer for the submariners lost to the sea and Cloutier himself splashed champagne on the vessel for its ceremonial christening. With that important step done, the float is now ready to be used in all manner of celebrations and ceremonies.

“The deck is large enough that we can actually be on the float with it going down the street,” Cloutier said. “We also plan to use it for stationary events too. There’s an airshow coming up in Goldsboro, and we’re going to have it there.”

It’s the definitive fashion event of the season in Belhaven, and it’s coming to town this weekend. For the past... read more