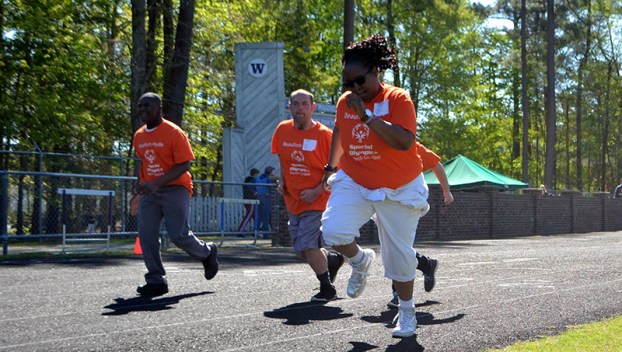 ALL THAT GLITTERS: Tara Reddick, 28, gets a good jump out of the box in her 100-Meter race victory sporting her sparkling silver shoes Tuesday morning at Washington High School. (Mitchell Thomas)

Fun was the main objective at the Beaufort and Hyde counties Special Olympics on Tuesday morning at Washington High School.

A one-day delay due to field and weather conditions couldn’t stop the competitive spirit of kids of all ages who participated. Mini-games surrounded the football field. There was fishing, dunk-a-roo, cornhole and even face painting. Events such as the softball throw, 50-meter walk, and 100-meter sprint sent some participants to the award platforms.

One winner of the 100 was 28-year-old Tara Reddick, who dusted her competition right out of the gate.

“When I got cheered on, God told me I can do it. I got the sparkles on my feet,” Reddick said referring to her gleaming silver kicks. “It made me feel good about myself.”

Not all the fun was had on the race tracks though, as 8-year-old Ramiro Cortez-Hernandez said his favorite part was blowing bubbles.

“I want to keep playing with them,”  Hernandez said. “You blow them and then pop them.” 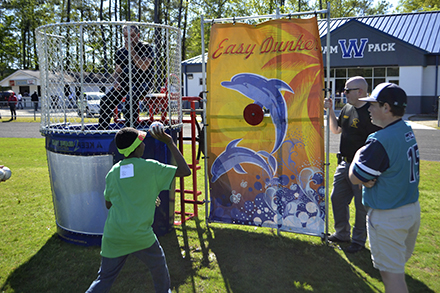 USA Special Olympics athlete and bronze medalist Jonathan Willis attended the event, and he earned a fourth-place finish in the 100-meter competition.

“It was awesome,” Willis said about the race. “You didn’t know I could go that fast?”

A new installment of the games was introduced for next year, as participants experimented with mini-javelins. If enough participants took a liking to it, they would bring it back in next year’s events.

Another winner of the 100 came off the track with a bit of swagger, as Damaujae “DKB” Brown was worried about his competition at first.

“I was just trying to beat my time from last year,” Brown said. “I thought the competition was tough at first, but I guess not. It was a good run.”

Supervisor of the event Eric Sedlacek was pleased with the turn out.

“It has gone really well. We’ve got 120 athletes from schools, through the community and Groupon (participants),” Sedlacek said. “I couldn’t tell you if it’s the biggest we’ve ever had, but it’s one of our bigger ones for sure. Through the help of our board, the countless hours, and headaches and all that mess, we’re always happy to put it on for them.”

CANDIDATE TALK: Thirteen of the candidates in the special election for U.S. Congressional District 3 had breakfast with more than 127... read more