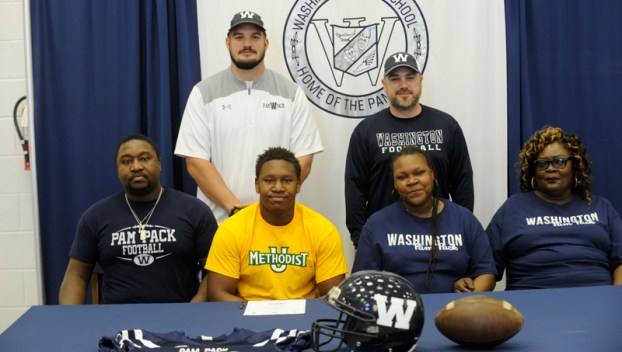 WASHINGTON — Hard work pays off — just ask Washington football player Michael Clark. The bruising running back put in the work on the field and off, including focusing on his studies, and established himself as a leader in the Pam Pack locker room.

Clark’s talent, work ethic and determination didn’t go unnoticed, as he signed to attend and play football as a preferred walk-on at Methodist University yesterday afternoon at Washington High School in front of family, friends and coaches.

Clark, who’s been running on the track team this spring to stay in shape, knows it was his drive and willingness to put in the work that gave him the opportunity to play football at the collegiate level.

“I’ve worked really hard in the weight room, doing right in school. So, everything kind of just set itself to where I’m supposed to be at now,” he said.

According to Clark, he was spotted by the Methodist coaching staff thanks to his own coaches at Washington, as they sent out film of the running back, who rushed for 636 yards and a team-high 11 touchdowns while splitting carries.

Clark’s hard work didn’t just help him earn the opportunity to play at the next level, but it also helped him become a leader for the Pam Pack, helping Washington head coach Jon Blank establish a new team culture.

“Michael was one of the first leaders we had in accepting the new standards of the program,” Blank said. “He has been one of our top kids academically, in the weight room, character-wise, leadership-wise, since we took over the program. And I just appreciate everything that he’s done for us.”

After coaching Clark at Washington and seeing him in action, Blank is confident Clark will succeed both on the gridiron and in the classroom when he goes off to Methodist.

“He’s just driven, individually, he’s self-motivated and obviously he comes from some great parents who have instilled some good values in him,” Blank said. “When he goes away, I don’t have any fear that he’s going to shine academically and on the field because he’s going to do anything it takes.”

Clark, who said his coaches gave been good role models for him, wants to be a physical education teacher after graduating from Methodist and coach high school football himself. When asked if he’d come back to coach at Washington, he responded, “That’s the plan.”

Clark is soon to embark on a new chapter in his life, and true to his nature as someone who never hesitates to work to better himself, his answer when asked what he most looked forward to about going off to college was in a similar vein: “Being able to better myself for the future (through) studying, becoming a better person than I am.”