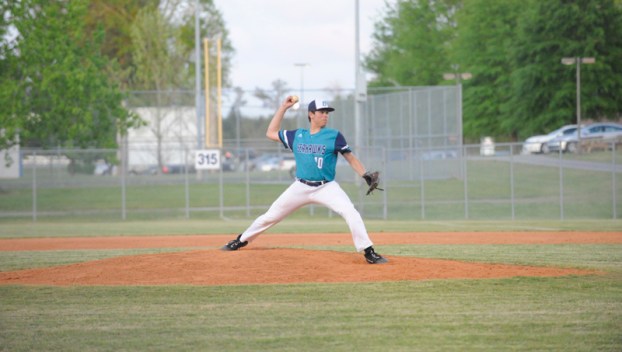 TWO-WAY PLAYER: Southside's Bryan Gutierrez gets it done on the mound and at the plate this season. (Sean Finnerty | Daily News)

CHOCOWINITY — Despite a dull performance, Southside freshman Bryan Gutierrez’s home run in the sixth inning proved to be a bright spot for the Seahawks in their 11-1 loss to Riverside on last night at Southside.

“I honestly thought he (Riverside’s left fielder) caught the ball, and I was about to go back to the dugout,” Gutierrez said about his first career home run. “Our (assistant) coach told me that all I had to do was hit a double in the gap or a home run. I told him, ‘I’m just trying not to strike out.’ That was my goal.”

Gutierrez’s solo shot, the first home run in the conference this season, came in the bottom of the sixth inning, but the Seahawks (7-10, 4-6 Coastal Plains 1A Conference) couldn’t string enough hits together to score again. Southside hitters totaled 11 strikeouts on the evening. Shawn Gerard roped a double in the second inning and Davis Porter singled in the sixth following Gutierrez’s homer, accounting for the Seahawks three hits.

“We’ve been getting on base, especially early, but we just can not get a timely hit,” Seahawks head coach Kevin McRoy said. “Give Riverside credit, that’s a very good ball club. They’re a good hitting team, and they started getting their timing down their second time through (the lineup).”

After the Seahawks blanked the Knights (16-2, 10-0 1A CPC) in the first frame, Southside issued nine walks to Riverside batters. The Knights paired those free passes with hits, scoring nine runs by the end of the fourth inning to take a 9-0 lead heading into the fifth.

Southside came out of the top of the fifth inning unscathed, stranding Riverside runners on base. But a couple of Seahawk errors in the sixth allowed two more Riverside runs to come across.

“I thought we struggled with commanding (the strike zone) early on.” McRoy said. “Bryan is solid, I wanted to limit the number of pitches he threw tonight because of the Easter tournament this weekend. Overall, I thought pitching was good; they (the Knights) are just a good hitting team.”

Moving forward, McRoy said he needs more offensive production from all of his players to help support the Seahawks who’ve already been getting it done at the plate.

“We just have to put the bat on the ball consistently,” McRoy said. “We’re not right now. We got four guys that are consistently putting in, and we need some other guys to step up and be more aggressive and more confident at the plate.”

Southside now turns its attention to the Easter tournament this weekend at Washington High School. The Seahawks will have a first-round matchup with Bertie tomorrow with first pitch set for 1 p.m. The tournament resumes Monday after a break on Sunday. Future matchups in the tournament are to be determined.

ROUNDUP: Night of success for Panthers while Seahawks struggle