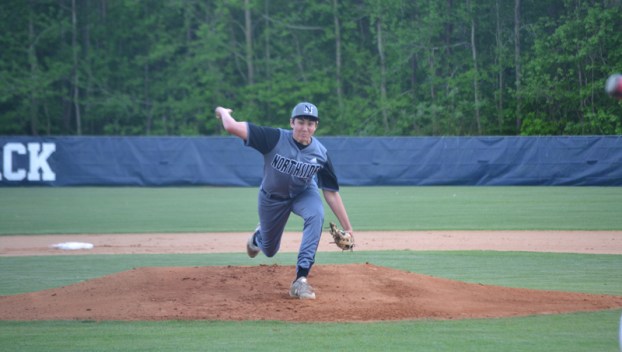 PANTHER ON THE MOUND: Northside’s Carter Boyd unleashes a pitch during Saturday’s win over Columbia in the Washington Easter Tournament. The junior allowed two runs in the first inning but buckled down and limited the Wildcats’ bats in a 13-3 victory. (Mitchell Thomas | The Daily News)

WASHINGTON — The Northside Panthers erased an early deficit and exploded for an 11-run fourth inning in a 13-3 victory in five innings over Columbia Saturday afternoon, in the opening round of the Washington Easter Tournament at Washington High School.

Northside (6-13, 4-6 Coastal Plains 1A) starting pitcher Carter Boyd took an inning to get settled after giving up two runs to Columbia (4-7, 3-4 1A Atlantic 5 Conference) in the first, but he would not allow another in his complete-game performance. Boyd gave up two runs on five hits, recorded a couple of strikeouts and forced a multitude of Columbia batters into ground balls for much of the game.

“It took me a little bit in that first inning to find the strike zone,” Carter Boyd said. “But once I found my fastball, it opened up my curveball a little bit.”

In the bottom of the first, Tyler Modlin reached on an error, a passed ball moved him over to third and Douglas Dixon chased him home with a sacrifice fly to center field. In the second inning, Northside’s Caleb Alligood reached first base on a free pass. A balk, a Matthew Adams single and a passed ball scored Alligood to tie the game, 2-2.

Out of the Panthers’ 13 runs, only four came in the form of an RBI. Columbia struggled defensively, recording six errors, four passed balls and tossing a couple of wild pitches in the fourth inning alone.

The bottom of the fourth inning turned into a carousel, as Northside sent 15 batters to the plate, with 11 of them scoring. Carter Boyd, Ryan Cornelius, Tyler Harris and Adams all scored twice in the frame. The Northside batters did enough to pull away from Columbia, as Cameron Craig, Modlin and Harris all had RBI singles.

Carter Boyd was proud of the insurance runs his offense produced while he was on the bump.

“We gotta keep hitting the way we have been,” Carter Boyd said about the team’s three-game win streak — the Panthers’ longest of the season. “We’ve done a good job with it the past few games.

“Once Carter went out and got himself settled down, he got some ground balls and it kind of got everybody in the flow of the game,” Keith Boyd said. “Now, we’re on a three-game win streak, so we just gotta keep riding that wave, baby.”

Northside’s win advanced them to a semifinal matchup with Bear Grass, which was played earlier this afternoon.