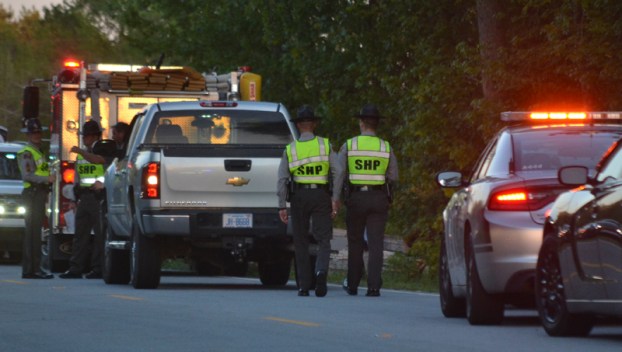 A SECOND VEHICLE: According to the N.C. State Highway Patrol, a second vehicle, a black Dodge Challenger, was believed to be involved in the fatal wreck that happened on N.C. Highway 33 on April 23. The second vehicle was found in Washington on Tuesday. (Matt Debnam/Daily News)

The North Carolina Highway Patrol located and seized a car on Tuesday that troopers suspect played a direct role in a fatal crash on N.C. Highway 33 last week.

According to the NCSHP, a white Dodge Challenger carrying three occupants was traveling west on N.C. Highway 33 on April 23 when the vehicle ran off the road and landed upside down in a ditch. Two of the three occupants were ejected from the vehicle.

Austin McKay, 22, of Edward, died on the scene, while two other occupants, Mason Pontius, 20, and Tyler Hartzell, 20, were transported to Vidant Beaufort Hospital. Hartzell, who was airlifted to Vidant Medical Center in Greenville, died from his injuries later that day, according to his obituary.

Pontius, who survived, was the only occupant wearing his seatbelt, according to NCSHP 1st Sgt. Gary Brown.

Brown went on to say that a second vehicle, a black Dodge Challenger, was caught on surveillance footage at two gas stations on N.C. Highway 33 at times that line up with the wreck. Authorities spent Monday and Tuesday searching for the black Challenger, which was located yesterday at an address on Wharton Station Road in Washington.

“We do know that the vehicle we recovered today did collide with the white Dodge Challenger,” Brown said. “We don’t know when or how at this point, because we’re still investigating, comparing damage, doing paint analysis and gathering statements from the driver of that vehicle, as well as the passenger that lived from the other vehicle.”

Brown says that because the driver of the black Challenger allegedly left the scene, there is a possibility that charges may be brought by the District Attorney’s office.

“In conjunction with the DA’s office, we’re going to have a conversation about what charges they want to take out,” Brown said.

Brown said that the wreck remains under investigation as the NCSHP continues to process statements from eyewitnesses and those involved in the accident.

Teens pledge to not use phones while driving