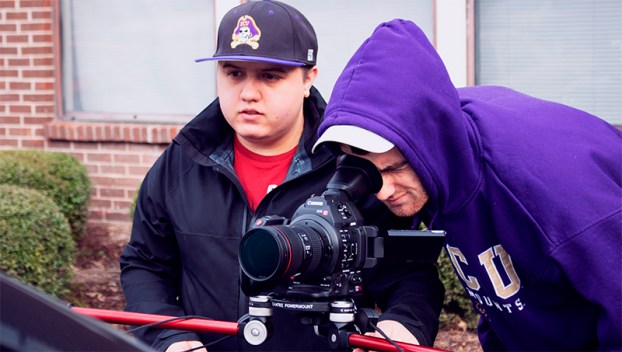 SETTING THE SCENE: East Carolina University film student and director Nick Leach (left) and director of photography Connor Fredericksen, set up a shot for "A-L-I-E-N-S," Leach’s short film. “"A-L-I-E-N-S" will premiere, along with 14 other seniors’ films, at the Turnage Theatre on Thursday, part of the 2019 Senior Film and Video Production Thesis Showcase/Premiere. (Charvez Keys Jr.)

Film lovers in search of up-and-coming talent will find it at Arts of the Pamlico’s Turnage Theatre on Thursday evening.

“This semester the senior class has been making art thesis films,” said Senior Showcase director Nick Leach. “This is the culmination of these films.”

Fifteen films, representing a wide array of genres, will be shown on the big screen of the early 20th-century theater in downtown Washington. The films range in length — some are as short as six minutes, others as long as 27.

“It’s very varied, because these seniors were allowed to explore any genre that they wanted to,” Leach said. “So, there’s comedy, drama, horror, documentaries.”

Leach, whose own film, “A-L-I-E-N-S,” is slated to appear Thursday night, said the number of films showcase this year is the largest produced in a single semester by seniors. With groups of five students working on one another’s projects, planning and production was an education in budgeting, retaining talent, writing, producing and directing. The students worked with film and video production professors Michael Tierno and Erick Green on their projects and putting together the showcase. Several community members in both Greenville and Washington juried the show — awards will be handed out in a variety of categories including best actor, best actress, best director and best narrative film, among  others.

The senior showcase is free to the public, and it’s a good opportunity to be entertained, according to Leach.

Doors open at the Turnage at 4:30 p.m. Thursday, and the first screening will be at 5 p.m. During intermission a reception will be held, and awards will be given out after the films.