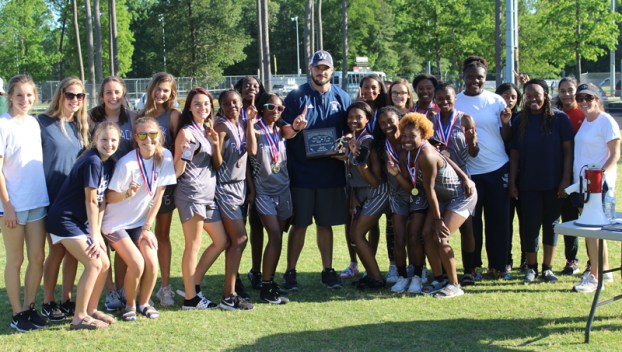 WASHINGTON — After falling just short last season, it was redemption for the Washington girl’s track and field team in 2019. The Pam Pack won their first girls conference championship since 2015 on Wednesday. The boys finished second.

“Last year, we had a feeling that the girls team left some points out there,” head coach Perry Owens said. “Through winter workouts, all they wanted to was finish the job in 2019. My girls came out with intensity and focus in every meet this season and it led to this accomplishment. I’m so proud of the girls team for working so hard to get here, but they know that they have some unfinished business to take care of.”

In the 4 X 100 meter relay, Ayden-Grifton had the lead, but dropped the baton in the final exchange. The Pam Pack took first place in the event and it gave them a big boost.

In the 4 X 200 girls relay, Kimaja Spencer ran a great third leg to catch up with Ayden-Grifton, the anchor leg featured a photo finish. Nykaya Ebron was able to get the victory for her team.

“We just wanted to be first,” Ebron said. “It was about pushing myself to finish the race and not worry about who was in front of me or behind me. For regionals and states, I want to stay in shape and build my endurance. Everyone on the team has to have the mindset of winning and being competitive.”

The boy’s team also had a successful day, finishing in second place overall after winning the title last year. Washington scored 134 points, but Kinston edged them out with 152. The Pam Pack had excellent individual performances. Dawson Cox was named the conference co-runner of the year. He won the 1600-meter (4:54.22) and 3200-meter (11:14.25) for his team.

“It feels great,” Reid said. “Last year, I finished in third place behind two seniors who were really good. This time, I was able to beat two seniors to win the race. A win like this gives me a lot of confidence. I need to work on my form and once I get that down, I’ll add speed to it. It’s all about technique and speed when it comes to the hurdles.“

Coach Owens’ boys team only has one loss in 36 meets. Despite the second place finish, Owens is extremely proud of the work they’ve put in. He hopes both squads will take their momentum to regionals. The 2-A East regional track meet will be held at Mount Olive on May 11th.

“The boys team has lost one time in two years,” Owens added. “Being a second year track coach and having only one loss in 36 meets is difficult to do. I think we’ll have a lot of momentum for regionals and state, both of my teams are capable of winning conference titles next year if we continue to work hard.”