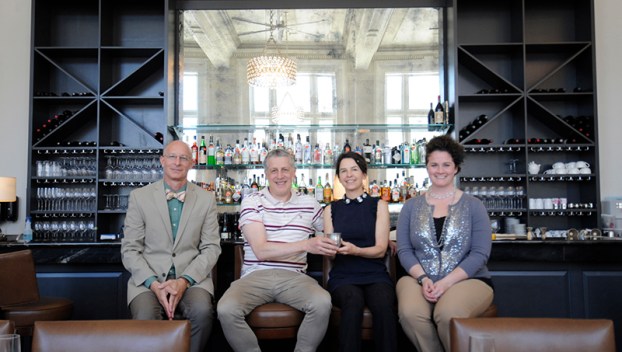 The Hackney sets standard for preservation

Its doors opened in January. These doors are not just any doors — they’re replications of the original doors that graced the grand First National Bank, built between 1918 and 1922 on the corner of West Main and Respess streets in Washington.

Today, that building is the home of The Hackney, an upscale restaurant serving brunch and dinner. This week, the ongoing restoration by owners Nick and Susanne Sanders was recognized by the City of Washington with the Terrell Award for Best Commercial Rehab. 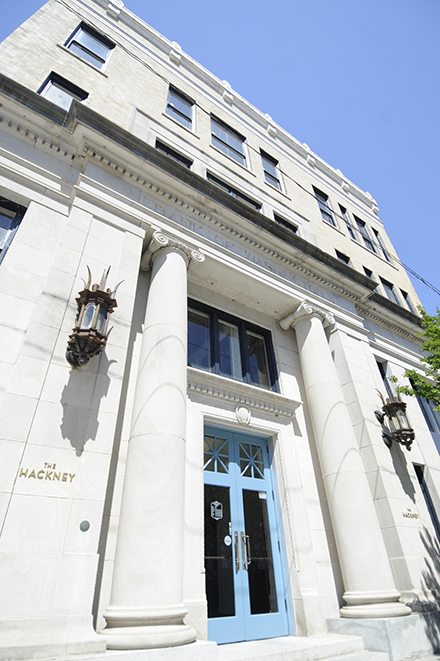 FUTURE USE: The rehabilitation of The Hackney, which started its life as First National Bank in 1922, includes a merger of three businesses: the restaurant, a gin distillery and a boutique hotel on the third and fourth stories of the building. (Vail Stewart Rumley/Daily News)

According to Campbell and Rebert, the Sanders have set the standard in downtown Washington preservation.

“They followed all the guidelines — the Washington Historic Preservation Commission guidelines — and consulted with the correct state and local preservation folks,” Campbell said. “Not only is The Hackney aesthetically pleasing and a great addition to the commerce of downtown, it also becomes an anchor for a whole section of Main Street.”

“I think they set the standard, did everything historically correct, went above and beyond and did not cut any corners. They’ve proven and shown that it’s not necessary to lower the standard,” Rebert said. “They adapted the use to the building and made the business plan work with the building.” 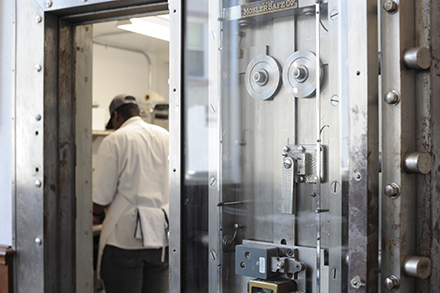 REPURPOSED: The vault from the building’s first use as First National Bank serves as entrance to The Hackney kitchen. (Vail Stewart Rumley/Daily News)

The Hackney restaurant is phase one of a three-phase project involving the entire building: a gin distillery will open in a separate ground-floor space in early summer and rooms on the upper floors — a hodgepodge of space that has housed doctors, dentists and even a radio station in the 1970s — are being reworked into boutique hotel rooms. For the Sanders, the building fit right into their business plan.

“It was a good fit between what we were trying to do and the bones of the building. As we’ve rolled back the layers of the renovations, it’s become even more suited to what we wanted to do,” Nick Sanders said. “I think you’re trying to push water uphill in trying to fit something into a building where it just doesn’t work.”

Inside, the building has been returned as close as possible to its origins: marble and wood floors were revealed — the line demarcating the line of tellers’ counter can still be seen — and wood wainscoting restored.

“We were excited to find the marble and the wood. Our contractors weren’t,” Susanne Sanders laughed. 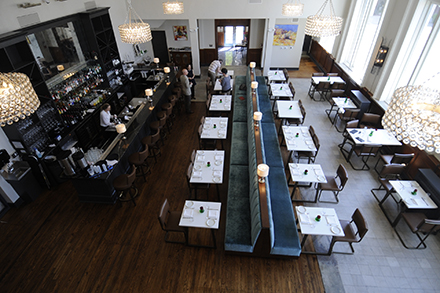 ROOM WITH A VIEW: The Hackney’s second-floor balcony is original to the circa-1922 building but before the renovation spent decades walled off. (Vail Stewart Rumley/Daily News)

A wall on the restaurant’s second story was demolished and the area returned to its original balcony, and is now an additional dining area. Seventy-five windows were not replaced — they were restored, including a trio of enormous picture windows overlooking Respess Street. Another three required rebuilding, as they’d been replaced decades ago with glass block.

“Windows are an area where people often get conflicted,” Nick Sanders said. “Our judgment was that it would benefit from what was already there, as opposed to replacing. They last longer, the quality of construction is better. The fact that they are still here after a hundred years, means that they will likely be around another hundred years from now.” 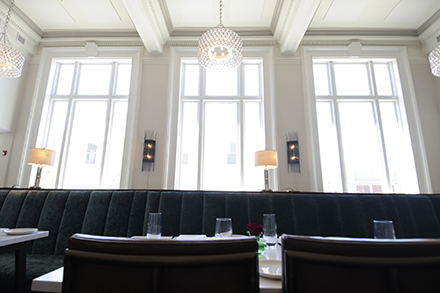 LET THERE BE LIGHT: The Sanders restored 75 windows in the building rather than replacing them, including these expansive windows looking over Respess Street. (Vail Stewart Rumley/Daily News)

The end result is an interior that breathes history, with all its imperfections.

The restoration was a collaboration of local, state and federal: private investment, city investment, the state Historic Preservation Office, National Park Service tax credits and a Washington Harbor District Alliance administered Main Street Solutions grant, with a requirement of the creation of nine jobs. It’s an investment that will reap rewards beyond Main Street and downtown, according to Campbell. 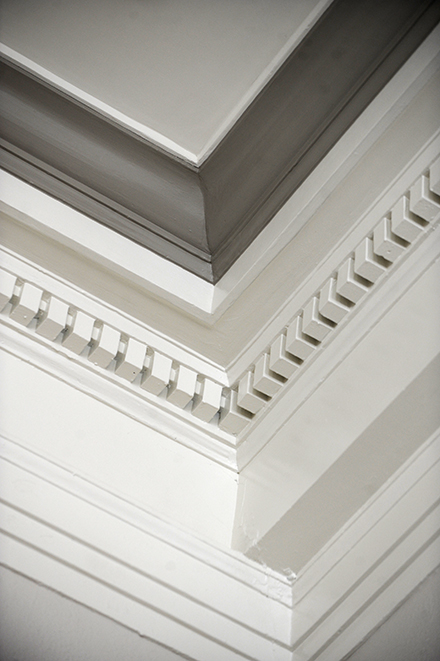 “What it does is when newer people are coming to town, and they see a significant investment occurring, that makes them a whole lot more interested in Washington, either as an investment opportunity for their business or as a residential opportunity,” Campbell said.

This article is the first in a series of Terrell Award articles.