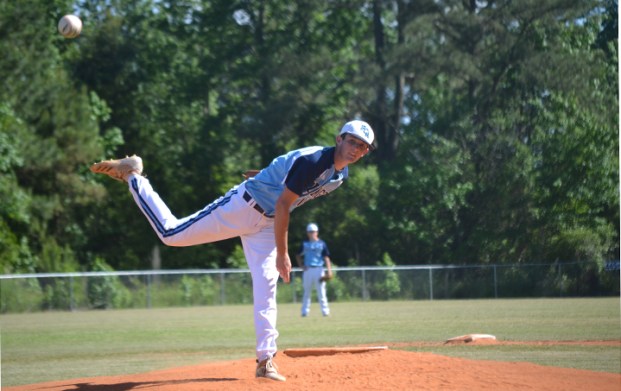 BELHAVEN — Pungo’s Miller O’Neal threw a complete game and gave his team a chance to win, but it wasn’t enough down the stretch as the Raiders lose to Albemarle, 2-0, Thursday evening in Belhaven.

Base running mistakes were ultimately the demise of a relatively young Pungo squad. In the third inning, Freshman Devin Cadle led off the inning by roping a double over the left fielders head. Ben Simmons singled to put runners on first and third with no outs.

On the next pitch, Simmons stole second, the catcher threw it down and Cadle took off to home. Both runners would get caught in a rundown for a double play.

The Raiders had some opportunities to score throughout the game, but couldn’t string the hits together.

Pungo junior pitcher, O’Neal found himself in a couple of jams, but he never panicked and got himself out of them with little to no damage done.

In the sixth and seventh, Albemarle was finally able to break through in the contest. Five of the Colts’ 10 hits came in the last two innings, and it was just enough to give their relief pitcher some cushion to finish the game out.

“We just didn’t come out and hit the ball today,” Pungo head coach Reggie Bishop said. “(O’Neal) has kept us in ball games all year. He’s been our ace and we’ve been in every ball game he’s pitched in this season. But, we had a couple base running mistakes and weren’t very selective at the plate.”

“I just try to make sounds and distract the other team’s pitchers.” Alligood said after his first season ever playing baseball.

“I wish I had him for several years, we could’ve had him going. He’s really come a long way this season.” Bishop said about Alligood.

In his first year at Pungo Academy, Mason was very thankful for his season, as he played football, baseball, and basketball.

Despite having a relatively good day at the plate, Simmons was frustrated with the outcome.

“Our mental was more of what got us, we played together as a team but we didn’t come up in the big moments like we needed to,” Simmons said.

Pungo’s third baseman and would-be starting pitcher in the Raiders next game, reflected on the season and how the game unfolded Thursday night.

“It was a great season. I wasn’t expecting to go home tonight. Especially after last season we went to the third round and played the (eventual) state champions,” Cuthrell said. “We just weren’t here to play today. Swinging at pitches over our heads and not staying focused.”

The Raiders will have a large senior class next year, as juniors — Brent Benson, Ryan Bishop, Nate Vannstaalduinen and O’Neal — will lead the team.

Panthers’ season ends in second round

PINETOWN — A valiant effort and comeback attempt in the bottom of the seventh inning wasn’t enough to overcome Vance... read more