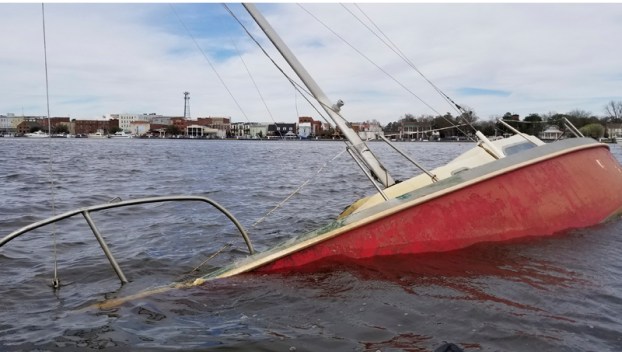 CHERISHED JUNK: The Treasured Jewel, a vessel abandoned in the Pamlico River since January 2018, was removed from its resting place by a contractors hired by the City of Washington earlier this week. (Matt Debnam/Daily News)

An aquatic eyesore that has besmirched the scenic beauty of the Washington waterfront for 15 months is no more.

The City of Washington, with permission from the owner of the abandoned boat “Cherished Jewel,” had the vessel raised and removed from the Pamlico River this week and taken to a landfill.

“We got permission from the owner to take possession of the boat and then raised it with a contractor to get rid of it for us,” Washington dockmaster Rick Brass said.

With the Cherished Jewel gone, the city is also seeking to remove a second vessel by the name of “Roxanne,” another boat that has become an issue. Brass said the vessel has dragged anchor a number of times, ending up on the southern shoreline of the river and potentially threatening other boats on the water.

“I guess you’d say it’s part of an ongoing process,” Brass said. “The boats out there that aren’t used regularly that aren’t maintained, we’re trying to make sure those things get out of the harbor. We certainly want to invite people to come and anchor, but their boats should be properly registered, they should be showing anchor lights, should be in good condition and able to move under their own power. We just don’t want the Washington harbor to be a dumping ground for people’s boats.”

While Cherished Jewel was removed with the owner’s permission, Washington has toyed with the idea of formalizing rules about abandoned and derelict vessels in city ordinance. A draft ordinance would place the boats under the city’s nuisance ordinance, and was most recently under review by the city attorney.

“I was personally very happy to see it out of here,” Brass said of Cherished Jewel. “It was pretty much an eyesore, so I was happy to get it our of here. Everybody in Washington takes a little bit of pride in the nice waterfront we’ve got. I know my dock attendants work pretty hard on keeping the place clean and nice and welcoming to visitors. Boats that aren’t maintained take away from the ambience.“

All told, Brass said the cost to remove the boat was less than $4,500, but could not provide an exact figure. Brass said it may be difficult for the city to recoup the cost of removing the vessel from its owner, who is no longer a city resident.

“I hate to see the taxpayers having to pay for something the boat owners ought to be responsible for,” Brass said. “There’s about three or four boats out there that haven’t moved in at least a year and one of them in about two or three.”

School placed on lockdown after nearby shooting