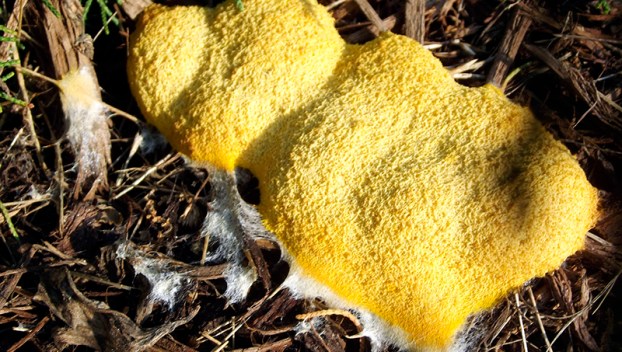 I had a sample come into the office this week that was just a disgusting mass of yellow goo found by a homeowner in their mulch. The question is, “What is this alien growth on my mulch that resembles dog vomit?” It looks like a stray dog got into my yard and vomited next to my bushes.

This is the fruiting body of a type of slime mold aptly named Dog Vomit Slime Mold (Fuligo septicai). It’s usually yellow, but it can come in a multitude of colors from cream to orange to dark red. Typically, this issue rears its ugliness towards the latter part of the summer, but not always. Experiencing the right weather conditions for growth will bring this ugly fungus out of the woodwork quite literally.

Slime mold is an organism that feeds on bacteria found in decaying plant material, i.e. mulch. When trees are harvested and moved through the forest, they pick up the fungus from the forest floor. The trees are turned into mulch, then the mulch is spread in your ornamental beds. The fungus lies dormant until weather conditions are conducive for its emergence. Typically, we see dog vomit slime mold after a good rain preceded by a longer period of warm dry weather. Poor soil drainage, thatch build-up, shady areas or low-lying areas can all be factors in the occurrence of slime molds.

Slime mold has several different forms. It produces spores that are wind-borne and can remain viable for several years until conditions are favorable. The mold can also appear as patches of gray, dark blue or white mold on grass blades. I had two police officers come in a few years back that had responded to a call of vandalism. The alleged vandalism was to a home lawn. The homeowner stated, it looked as though someone had emptied their vacuum cleaner on my lawn. The officers showed me photos that they had taken at the scene of the alleged vandalism, and it was white slime mold growing on the grass blades. 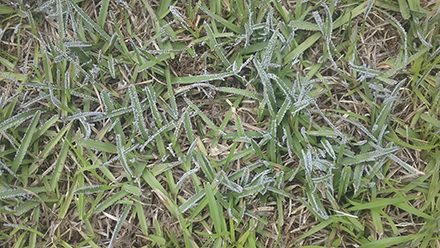 NO VANDALISM HERE: Slime mold has a few different looks, including this one, which was mistaken for lawn vandalism. The photo was taken by Washington Police Detective Ron Black. (Ron Black)

If you see dog vomit slime mold, do not be alarmed: it is not toxic to plants or animals and, in fact, normally goes away with a few days of dry weather. If you do not care for its unsightliness in your ornamental beds, it can be removed using a pitch fork, bagged and thrown in the trash. You can also wash it out of mulch with a good hard spray from your garden hose. Removing it will not, however, keep it from coming back. One strategy is to turn your mulch to aerate it in the spring of the year. Again, this will not remove the problem but may lessen the chance of conditions being favorable for the growth of the fruiting body of the fungus. N.C. State Extension does not recommend using any chemical control for this issue unless it is a severe case.

I would like to extend a huge “Thank you” to all who supported the Extension Master Gardener Volunteer program in Beaufort County this past weekend at the annual Plant Sale. It was hugely successful! This is an amazing group of volunteers that is such an asset to the community here in Beaufort County!

If you have a horticulture question, call the Extension Master Gardener volunteers in Beaufort County or Gene Fox, at 252-946-0111 or email Gene at gene_fox@ncsu.edu. Your question might just make the paper!

Two resolutions touching on hot-button issues — drugs and immigration — found their way onto the county agenda this week... read more