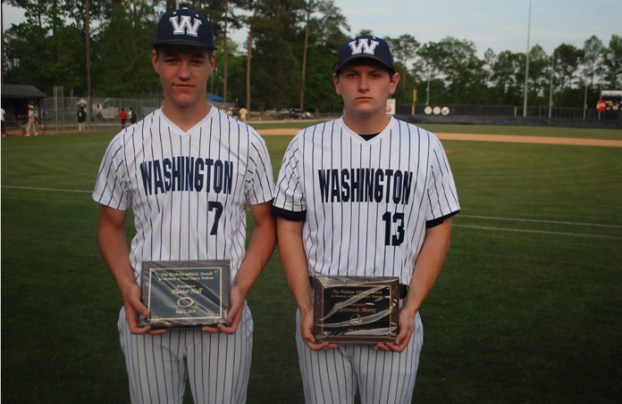 WASHINGTON — The Watkins Athletic Award is a special award in the Beaufort County area, as it is awarded every year in memory of Trent Emery Watkins. This year’s winners are Pam Pack’s Hunter Hall and Jeremiah Moore.

Watkins was a star baseball and football player for the Washington Pam Pack. He played all four years, three at the varsity level for the baseball and football team. He went on to play American Legion and semi-pro. When he passed away in a motorcycle accident in April of 2004, he was a sophomore in college and was coaching the varsity Pam Pack baseball team. The award is usually presented at the home baseball game closest to Watkins’ birthday, May 1.

They present the award every year to players that demonstrate strength of character and integrity, a positive attitude, with the determination and drive to win. The award consists of two $750 scholarships to give senior athletes. One for baseball and one for football, but its possible that one player could receive both.

Hall — awarded on behalf of the football side of the scholarship — has played various positions this season for the diamond Pam Pack. He obtained a scorching hot .460 batting average with 24 RBIs in his 23 games played this season. He is also undefeated (9-0) in games started on the mound this year.

“When they called my name I thought, ‘Am I dreaming or something?’ I just couldn’t believe it at first,” Hall said. “Then, you know, I was walking through the line getting handshakes and hugs and I was thinking, ‘Man, I can’t believe this is really happening right now.’”

Moore, on the other hand has a .397 batting average on the season, knocking in 30 RBIs. He’s scored 19 times on the season, and has come up big for the Pam Pack multiple times in the late part of this season and into the playoffs.

“It felt good. We knew their family and the Watkins’ so it felt good,” Moore said as he walked off the field after a three-RBI night.

These two are very deserving of the awards. Their desire to win shined through again Friday night after coming back from a 12-3 deficit to score 10 unanswered runs in the final three innings. Hall and Moore were key parts to the comeback performances that made them worthy of the Watkins’ award.