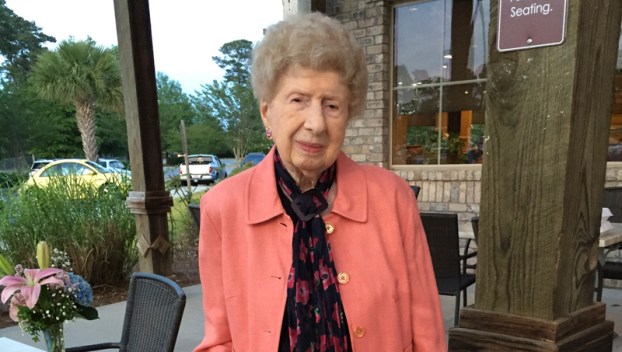 CENTENARIAN: LaRue Evans, who taught countless students in eastern North Carolina during her 41-year career as an educator, will turn 100 on Tuesday after celebrating with a party Sunday in Winterville. Evans spent 21 years of her teaching career at Washington High School. (DeLyle Evans)

In 1919, the world was still catching its breath and adjusting to the new realities left in the wake of World War I. Women in the United States were finding their voices in politics with the passage of the 19th Amendment to the Constitution. And in a little Beaufort County community called Stokes, LaRue Evans was born on May 21.

This weekend, she will celebrate 100 years on earth with a birthday party on Sunday, with the big day falling next Tuesday.

The only child of Jim Mooring, a farmer, and Lelia Stokes Mooring, a school teacher, Evans was born to be an educator. That was the path she would follow for her own career, which spanned 41 years at high schools throughout eastern North Carolina.

“I grew up with teachers living in my parents’ home in Stokes, and I enjoyed teaching my dolls when I was young,” Evans said.

Graduating with an A.B. Degree in English, French and history from East Carolina Teachers College in 1940, she began her career teaching history at Grimesland High School.

“When graduating from college, I went to see D.H. Conley, who was superintendent of Pitt County Schools,” Evans recalled. “At the time, Grimesland had a high school. He said that Grimesland needed a history teacher and for me to contact John Elks, the chairman of the Grimesland school board. I found Mr. Elks at his farm riding his tractor. I told him I was there to apply for the job of history teacher. He asked, ‘Do you smoke?’ I said ‘No, sir.’ He asked, ‘Do you drink?’ I said ‘No, sir.’ He said, ‘Well then, I guess we can use you.’ And I had my first job.”

In 1960, Evans earned her Master’s Degree from East Carolina College. It was her final assignment, Washington High School, where she would spend the greatest portion of her career — 21 years from 1960-1981.

“It was a pleasure teaching at all of them, so I had no favorites,” Evans said. “I had wonderful students, many of whom continue to be special friends today.”

For her students, Evans says she always tried to teach them to think for themselves rather than just memorize facts. The most significant change she has seen in education is the use and reliance on computers.

At age 99, and just days shy of 100, Evans is in remarkable health, both physically and mentally. She has few wrinkles, something she attributes to not using soap on her face. The only health issues she faces are arthritis and macular degeneration, and her mind is sharp as a tack.

As to her favorite thing she has done in her 100 years, Evans says she has found great pleasure in her reading. Evans lives in Winterville with her son, DeLyle Evans, in the same home where she has lived since 1947. On Sunday, she will celebrate a century surrounded by family and friends during a party at the Winterville Depot.

It’s a disease that affects more than 100,000 people nationwide — mostly African-Americans — and one local group is doing... read more