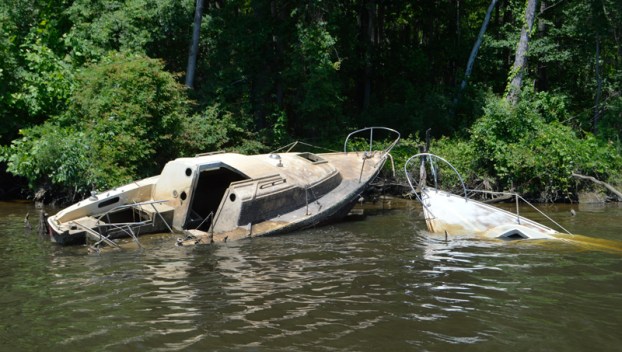 STILL JUNK: The Cherished Jewel, left, the abandoned vessel removed from the Washington waterfront two weeks ago, now sits partially submerged alongside two other abandoned boats on the Tar River near the Pitt County line. City officials say they are working with the contractor to have the boat taken to a landfill, as per the terms of a $1,750 service agreement for its removal. (Matt Debnam/Daily News)

An abandoned boat removed from the Washington waterfront earlier this month is no longer an eyesore on the Pamlico River. Instead, it appears to have found a new home on shores of the Tar River, just over the Pitt County Line. It is now sits alongside two other boats on the shoreline of a piece of property on Clarks Neck Road.

The vessel Cherished Jewel was pulled from the river off the Washington waterfront earlier this month after laying abandoned on the bottom of the Pamlico River for more than 15 months. With the cooperation of the vessel’s owner, the city began the process of reclaiming the vessel to have it lifted and taken to a landfill.

Russell said the city entered into a service agreement with Atlantic Coast Yacht Delivery to remove the vessel from the harbor and disposal of the vessel at a landfill of the business’ choosing. All told, the work cost the city $1,750.

“Our main concern was to remove the abandoned property from the waterway to prevent any possible accidents from the hazard,” Russell said. “It has been removed, it hasn’t been disposed of yet, but it is securely docked at 6060 Clarks Neck Road.”

Russell said the initial timeline for the project was a couple weeks, but the process for getting the boat floating proved to be more involved than anticipated.

“We did grant an extension, but they haven’t completely fulfilled the contract at this point, but we are working with them to fulfill that,” Russell said.

Looking at the issue of abandoned vessels on a larger scale, the city has drafted an ordinance that would expand the city’s ability to remove derelict vessels from the harbor district.

“We want to be boater-friendly, but we’re still looking into that to make sure that we have responsible boat owners that are mooring their boats between the bridges in the harbor,” Russell said. “We haven’t finalized any of that ordinance yet. It’s still something we’re looking into, but we want it to be agreeable to everyone concerned.”

For Colleen Steckel, energy is a precious commodity. She’s one of an estimated 1 million people in the United States... read more