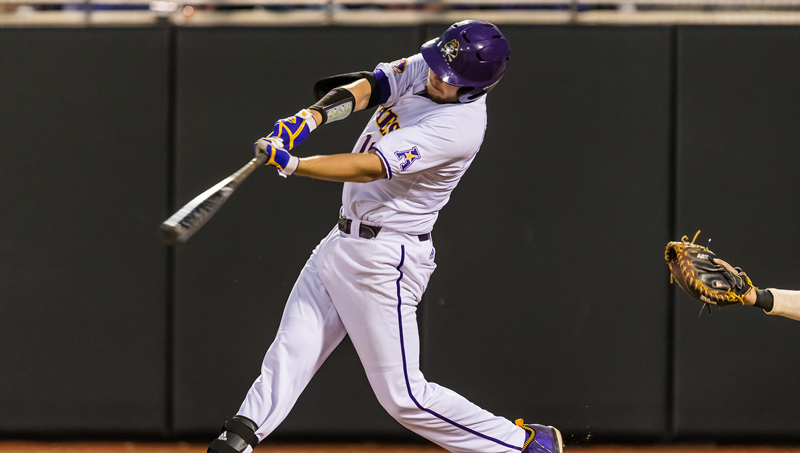 ALL-AMERICAN: Alec Burleson excelled at the plate and on the mound this seaosn and received first-team All-American honors along with teammate Jake Agnos. (ECU Athletic Media Relations)

Agnos, who was named The American Pitcher-of-the-Year, has appeared in 15 games (all starts) where he owns a 10-2 record with a 2.00 ERA. The left-hander has fanned a school and conference single-season record-best 131 batters while walking just 38. He has combined on five shutouts and has allowed 23 runs (20 earned) in 90.0 innings of work and set a modern day school record with 32.2 consecutive scoreless innings that ended on a wild pitch in the AAC Championships against Houston. Agnos has recorded double-digit strikeouts in a contest five times with a career-high 12 against UConn in a personal-best 8.2 innings on April 18. He was named to the Golden Spike Midseason Watch List and a semifinalist for the College Baseball Foundation’s National Pitcher-of-the-Year Award.

Burleson, a Collegiate Baseball Freshman All-American a year ago, earned First-Team All-AAC honors as an outfielder and a second-team pick as a utility player. He currently leads ECU in five offensive categories including average (.370), hits (81), doubles (21), multi-hit games (26) and RBI (54). On the mound, he sports a 5-1 record with five saves and a 2.98 ERA in 21 appearances (seven starts). The lefty has struck out 54 batters while walking 21 in 51.1 innings and has held opposing hitters to a .236 composite batting average. Burleson earned his 10th career win at No. 12 UNC (May 8) and struck out a career-best 10 batters in his second start of the season against Monmouth (Feb. 23). Overall in the field, he sports a perfect 1.000 fielding percentage with 167 putouts and 26 assists.

Holba and Packard are the sixth and seventh All-America selections under head coach Cliff Godwin, joining Reid Love (2015), Evan Kruczynski(2016-17), Travis Watkins (2017), Chris Holba (2019) and Bryant Packard (2019). It also marks the seventh-straight year the Pirates have had an All-America selection on their team dating back to 2013.