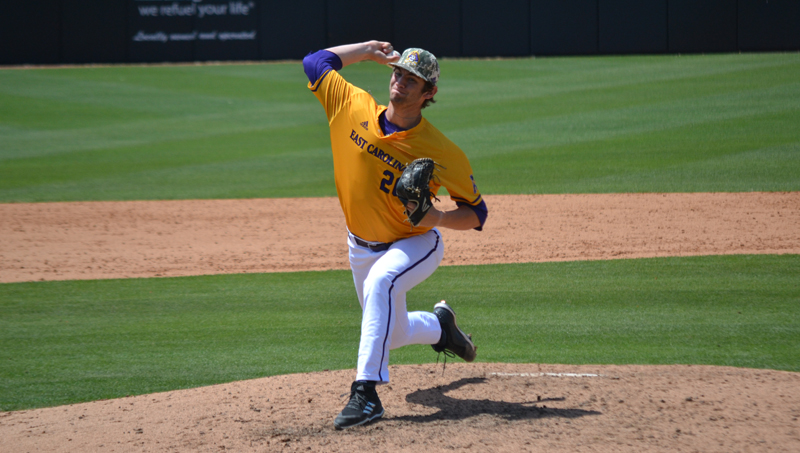 CLOSED OUT: ECU’s Gavin Williams tosses a pitch in a game earlier this season. The Pirates were shut out in game two of super regionals, being outscored 26-1 in both games. (Mitchell Thomas / Daily News)

LOUISVILLE, Ky. — Bobby Miller tossed eight innings of one-hit ball while flirting with a no-hitter and helped No. 7 Louisville to a Super Regional clinching win, 12-0, Saturday afternoon at Jim Patterson Stadium. With the win, the Cardinals (49-16) advance to their fifth Men’s College World Series since 2007 while the Pirates (47-18) saw their season come to an end.

The Cardinals struck for three runs in the second inning, taking a 3-0 lead, and never looked back. Drew Campbell’s two-run triple past a diving Bryant Packard down the left-field line scored a pair of runs before scoring later in the frame on a wild pitch.

Miller (7-1) struck out five, walked two and allowed the lone ECU hit in the ninth inning when Thomas Francisco singled to right field with Chandler Jenkins standing on first base. Michael Kirian worked the ninth inning, walking one to preserve the shutout.

Burleson (6-2) suffered the loss, surrendering three runs (all earned) on three hits with five strikeouts and a pair of walks in two innings. The Pirates would use five arms in relief, getting outings from Gavin Williams, Sam Lanier, Tyler Smith, Evan Voliva and Cam Colmore.

Louisville plated three runs in the third inning, extending its lead to six, 6-0. With a runner on first, Campbell doubled down the right-field line, putting runners at second and third with two outs. Justin Lavey followed with another double to right clearing the bases and Henry Davis’ RBI single to left pushed across Lavey on a close play at the plate.

The Cardinals added three runs in the fifth and three more in the ninth to cap the scoring at 12-0.

ECU closed out the season with 47 wins, which is tied for the second-most in a single-season with the 1990 and 2001 clubs and only trails the 2004 Pirates, who tallied a school-record 51 wins. The Pirates, which won the American Athletic Conference regular season title in a runaway fashion, hosted their second-straight NCAA Regional and advanced to the Supers for the second time in four years.