ECU among other NC universities to sell alcohol at venues 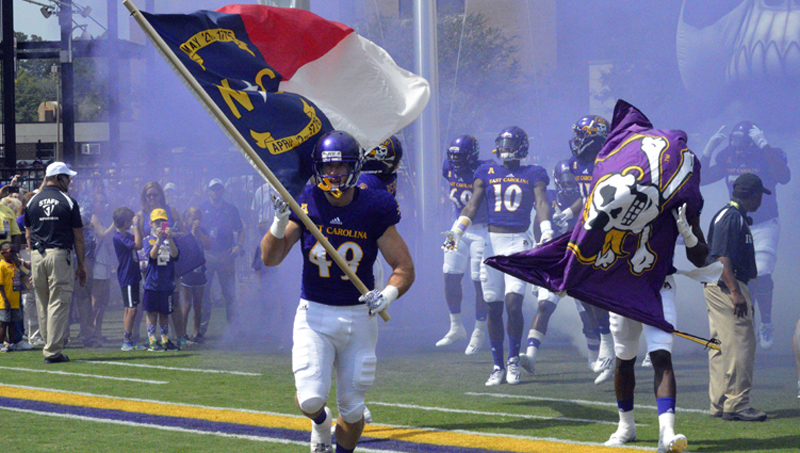 FIRED UP: Now-graduated receiver Brian Hardy leads the Pirates out of the tunnel before playing N.C. State a couple of seasons ago. East Carolina University will begin the sales of alcohol in its sports venues this fall. (Michael Prunka / Daily News)

GREENVILLE — The East Carolina University Board of Trustees unanimously voted Friday to approve the sale of beer and wine at athletic events, making it the fourth North Carolina university to adopt the new policy.

North Carolina State University was the first to adopt the plan. Now, University of North Carolina at Charlotte, UNC at Chapel Hill, and ECU have followed suit. UNCC is using a one-year trial for alcohol sales.

UNC-Pembroke is the first and only school so far to say no to selling alcohol in its venues.

According to The News & Observer, UNC Pembroke Board Chairman Don Metzger said in a statement, “While we respect the intent of our sister institutions and support their efforts, we believe allowing open alcohol sales at our athletic events could potentially send the wrong message to our community,” Metzger said. “UNC Pembroke does allow tailgating and consumption of alcohol at athletic events for those of legal age under strict university guidelines and policies.”

N.C. A&T, Appalachian State, UNC-Wilmington, N.C. Central, UNC-Asheville, Fayetteville State, Winston Salem State and Elizabeth City State are considering the change but have not made a decision yet.

UNC-Greensboro is considering allowing alcohol sales at off-campus events but does not plan on selling alcohol at events on campus, according to the Greensboro News & Record.

As far as private universities go, Wake Forest has been selling alcohol in their men’s basketball and football venues since 2016. Duke, however, doesn’t plan on changing its policies even if their ACC counterparts do.

N.C. State chancellor Randy Woodson says that with this new ordinance, they can have a more controlled environment.

“When you control it within your own facility, you control the amount that’s served and you control when people shouldn’t be over-served,” Woodson said. “If you look across the country, every place that’s done this has seen a reduction in alcohol-related incidents.”

In a similar statement, ECU athletic director Jon Gilbert said it will “Enhance our game-day experience for those who choose to partake in the endeavor,” according to the News & Observer.

The Pirates travel to Raleigh to face the Wolfpack on Aug. 31 to open up their regular seasons, and alcohol sales will be in full swing.