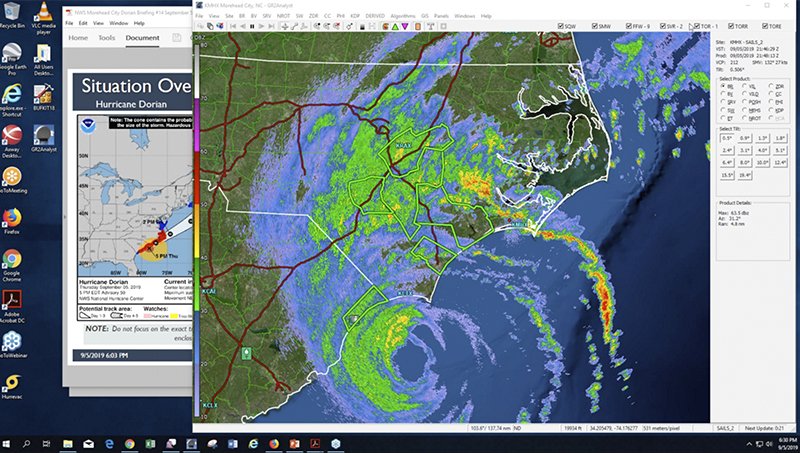 The National Weather Service, Newport/Morehead City office forecast has not changed significantly for Beaufort County since its morning update.

At 6:30 p.m., the eye of Dorian was south of Pender County, and the Dorian was on track to scrape from Cape Fear to Cape Lookout to Cape Hatteras, according to David Glenn, meteorologist-in-charge for NWS, Newport/Morehead City.

“Some of that depends on some of these small movements (of Dorian) and where the eye tracks,” Glenn said.

As for storm surge, Beaufort County waterways remain in the 4-to-7-feet above ground level, though the higher ranges may be seen on the south side of the Pamlico River. Because the rotation of Dorian means winds are from the northeast as the storm brushes the coast, water may be blown towards the south side of the river.

“Winds will have a northerly aspect to them, so that makes sense to have a little bit more there on the south side of the river than the north side,” Glenn said.

Peak hours for storm surge will occur after midnight into the early morning hours of Friday, Glenn said.

The concern along the Outer Banks is 20-foot seas, and an inundation on the sound side once Dorian has drawn parallel to the coast and winds begin to push water out of the estuaries into the sounds.

“When that process occurs, we’re expecting the water level to rise rapidly,” Glenn said, adding that this flooding would peak on Friday afternoon.

Much of the Outer Banks can also expect sustained winds in the low 90s and gust upward of 120 mph.

Glenn also emphasized there has been more tornado activity than previously predicted, and encouraged all residents to make use of multiple alert systems (the Tornado app by the American Red Cross is free).  Beaufort County was under a tornado warning earlier today, with a watch extended through the evening.

He stressed that no matter where one resides in eastern North Carolina, floodwaters are dangerous.

“Throughout this event, please remember: do not travel through water-covered roads,” Glenn said.