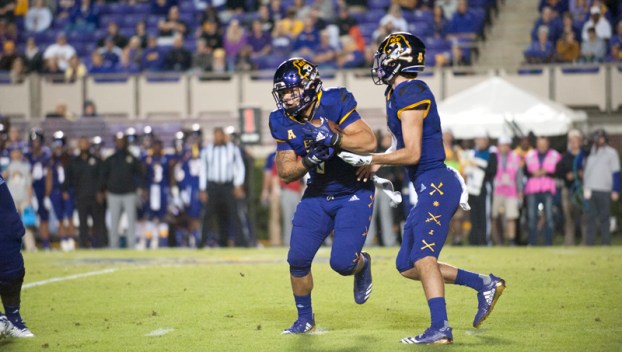 The East Carolina University Pirates notched their first victory since November of last season with the help of the ground game, dominating Gardner-Webb, 48-9, Saturday night at Dowdy-Ficklen stadium.

The emergence of the running game against the Bulldogs proved to be storyline, as the Pirates struggled all last season to move the ball on the ground. They ran it early and often, as starting quarterback Holton Ahlers rushed for the first touchdown of the Pirates’ season in the first quarter. The Pirates racked up 374 rushing yards, as Darius Pinnix picked up 135 yards on 21 carries — both career highs — with two touchdowns on Saturday. Demetrius Mauney also clipped the century mark with 107 yards on 13 carries, and Ahlers had 85 yards on 10 carries with two rushing touchdowns against the Bulldogs. Back up quarterback Reid Herring capped off the scoring with a 10-yard touchdown run late in the fourth quarter.

ECU’s offense threw the ball around to eight different receivers on Saturday night, as the 6-foot-1 sophomore from Charlotte, Blake Proehl, led the Pirates with seven catches for 68 yards and a score; the only receiver to reach the end zone.

Defensively, the Pirates picked off a couple of Bulldog passes that were both returned for big yardage. Gerard Springer had an interception returned for 41 yards and Ja’Quan McMillian took his interception 32 yards before being brought down.

Lou Groza award watch list member Jake Verity continued his campaign for the award making both of his field goal attempts from 24 and 28-yards on Saturday, making him 4-for-5 on the season.

The Pirates will have their hands full this coming Saturday as they head to Annapolis to take on Navy. The Midshipmen have only played one game thus far, two weeks ago against Holy Cross in a 45-7 victory. Navy had the week off this week and will have another week’s rest next week before traveling to Memphis. Last year’s matchup ended in a 66-31 drubbing of the Pirates in Greenville. The hope for head coach Mike Houston and company is to come away victorious for a second consecutive week in Annapolis this Saturday. The game will be televised on CBSSN and will kick off at 3:30 on Saturday afternoon.