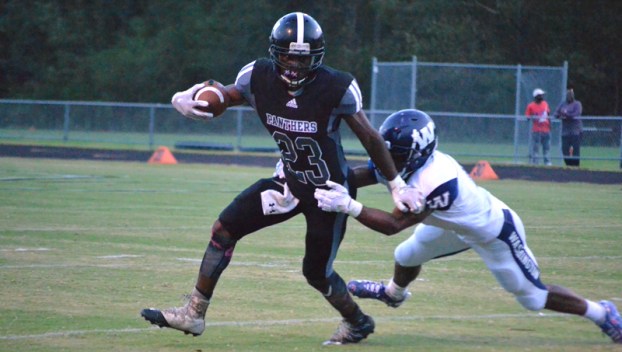 SHAKE IT OFF: Northside running back James Gorham struggles to get away from a Washington defender last week in the Pam Pack’s victory over the Panthers. (Mitchell Thomas / Daily News)

There are three enticing matchups around Beaufort County this coming Friday night, and a couple teams are still in search of their first victory of the 2019 season. After this week, it’s full steam ahead into their conference schedules, besides one makeup game in that have been moved to the middle of October for Washington (@ D.H. Conley) and Southside (@ Perquimans) stemming from Hurricane Dorian.

The Seahawks are looking to get on track and back in the win column this Friday evening as the Rebels of North Duplin (2-1) come to town. A familiar foe for the Seahawks, as they’ve played every year for at least the past decade. Last season, the Rebels came out on top after a 21-7 victory over the Seahawks. Earlier this season, North Duplin hosted the Northside Panthers and lost 21-7. However, the Rebels defeated South Lenoir in their opener 22-0 and beat Lejeune 48-0 last Friday night. The Rebels rushed for 337 yards and threw it for 104. The Rebels are a triple-option team and will likely give the Seahawks some trouble with a couple of key linebackers out right now in Keywon Campbell and Shantez Clark. If they’re still out, Southside will have to have some young linebackers to plug gaps and tackle well to take down a couple big, physical running backs.

I expect a big game out of Ricardo Waldron, Iverson Speller and Quinte Peele to contain the running game. If they can force Duplin into passing, the Southside secondary will have one big receiver in DJ Simmons to worry about, standing at 6-foot-1 and 180 lbs. Simmons is the tallest player on the team.

Look for head coach Jeff Carrow to open it up a bit for Hundley Stallings to twirl the football a few times on Friday night en route to their first victory of the season in a close one.

The Pam Pack were tested last week with an improved Northside team, but made enough plays to put the game away late in a 34-23 victory. This week, First Flight (0-2) comes into Washington having lost their first two contests to Gates County, and on the wrong end of a 56-6 drubbing from John A. Holmes last Friday evening. First Flight has multiple looks on offense. They’ll line it up in a modified wing-T look as well as drop back into shotgun. They have a left-handed quarterback who reads the defensive end on a multitude of option plays and will occasionally pull it out and throw it. The Nighthawks have a 6-foot-3 freshman playing tailback, as well as a speedy 5’5, 133 pound rusher. The Pam Pack linebacker and defensive line groups will be tested once again, but this time they won’t be facing seasoned upperclassmen like they were last week. This game will likely be competitive until the half, but Washington’s depth, athleticism and strength will power through to pull away late.

This one is interesting. Former Washington head coach Sport Sawyer is now the coach for Manteo. He has gotten his Redskins on the winning track, as they won their last two matchups against Columbia and Bear Grass by a combined score of 88-12.

Manteo likes to spread the field with three, sometimes four wide receivers. They have a big offensive line and a 6-foot-4, 201-pound quarterback that has no problems taking off and running, which may cause some problems for the Panthers. The secondary is going to be outsized by the Redskins wide receiver corps, and will have to rely on their speed and ball skills to contain the pass. On the Redskins’ 25-man roster, the Redskins have 14 seniors on it.

Expect the Panthers and Redskins to be locked in a four-quarter battle. This Panther team’s defense has been stiff thus far, and their offense has put up some points. It won’t be easy, but I foresee the Panthers coming away 4-1 heading into conference play.