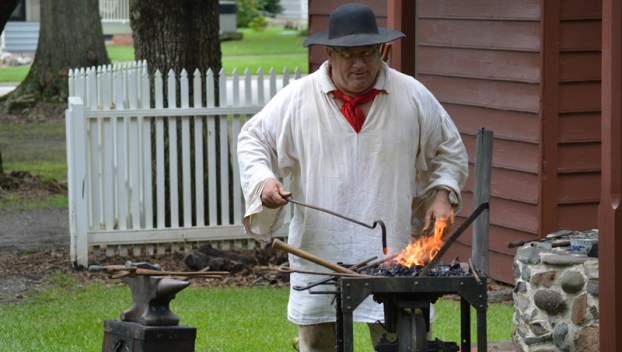 TOOLS OF THE TRADE: From gunsmithing to basket weaving, visitors to Historic Bath on Saturday will be able to see how 18th century craftspeople made a living. (Matt Debnam/Daily News)

Local history buffs will have a chance to take a step back in time this Saturday in Bath, learning about the tools and trades of colonial craftspeople. From 10 a.m. to 3 p.m., the Historic Bath State Historic Site will host an 18th Century Trades Fair on the grounds of the Palmer-Marsh House, featuring demonstrations from modern people keeping these historic traditions alive.

“We’re taking this opportunity to showcase some of the trades that would have been done in North Carolina around the 18th century,” said Historic Bath State Historic Site Director Laura Rogers.

Among the crafts being demonstrated, visitors will have the chance to see blacksmithing, gunsmithing, spinning, weaving, candle making, basket weaving and others. Those who attend will also be able to purchase some of the crafts made on site to take home as souvenirs.

“Several of the people who are coming are actually volunteers who are interested in historic trades,” Rogers said. “Some of them will be doing the modern equivalent of what was done in the 18th century, kind of making that craft relevant to today. But a few of our volunteers are also doing them completely in the 18th century style. For instance, our gun smith is a professional gun smith who will be putting together an 18th century rifle in the correct style with the period materials and tools.”

For the volunteers, and the staff of the historic site, showing the public the tools and methods used by colonial craftspeople is an important task and a reminder of what it took to survive three centuries ago.

“I think its really important to keep some of these trades alive so you can learn what kind of effort went into building our country and living back then,” Rogers said.

This is the third in a series of articles about the year since Hurricane Florence hit Beaufort County on Sept.... read more