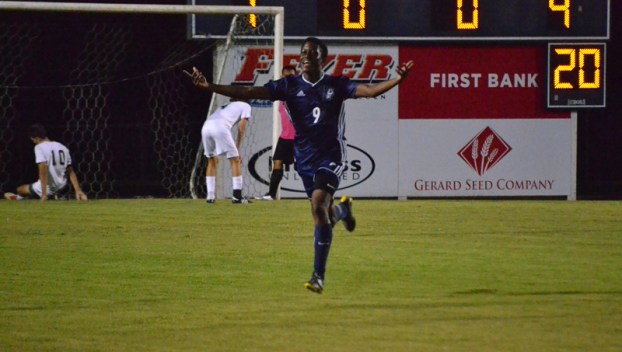 CELEBRATION: Washington’s senior striker Michael Reid puts the game on ice after a goal with nine seconds remaining and runs to the sideline to celebrate with his teammates. The Pam Pack defeated the Hawks 3-1 on Wednesday night. (Mitchell Thomas / Daily News)

A physical battle between two of the top teams in the 2A Eastern Carolina Conference opponents, ended with a Michael Reid goal in the final 10 seconds to put the game on ice. The Pam Pack defeated North Lenoir, 3-1, Wednesday evening at Choppy Wagner field.

Early on, a long throw in from Patrick Graham bounced off a North Lenoir defender and trickled into the back of the net only 13 minutes into the game.

A few minutes later, another throw-in from Graham found Elvin Elizalde and headed it into goal for a 2-0 lead.

The scoring would halt until the final 10 minutes of the second half. A long ball to the North Lenoir striker was called a foul from about 35-yards out. The free kick bounced off of Will Crisp’s glove, off the post and the ball rolled on the goal line stripe until it was punched in by the Hawks to cut the deficit in half.

North Lenoir had a flurry of offensive opportunities in the last few minutes with multiple corner kicks and a free kick. The North Lenoir offensive pressure would come back to bite them, though, as a deep ball was run down by Reid, he side stepped a defender inside the box and buried the shot into the corner of the net to seal the deal.

Head coach Jim Kozuch said he would’ve liked to see more consistency from his team and the referees on Wednesday night.

“Honestly we didn’t play great soccer tonight. We played tough in the first half, kind of fell back, played a lot of defense and didn’t play to the best of our ability,” Kozuch said. “I think the game definitely got a little bit chippy, a few too many calls let go in the first half and in a close game the excitement gets high, just glad nobody came out with any injuries.”

Pam Pack defender Ridge Zerniak was a little frustrated with the referees after the game, but said he was happy to stay undefeated on the season and in the conference.

“Our main thing was trying to shut down Taiwan (Hines), we put Stewert (Hopper) on him and let him follow him around the whole field. ” Zerniak said about the 6-foot-3 senior striker from North Lenoir. “Every single 50/50 ball tonight I was getting pushed in the back, it just wasn’t fun out there for me tonight, but glad we got the win.”

The Pam Pack will have two more home games next week, hosting Ayden-Grifton on Monday evening and John A. Holmes on Wednesday.

There are three enticing matchups around Beaufort County this coming Friday night, and a couple teams are still in search... read more