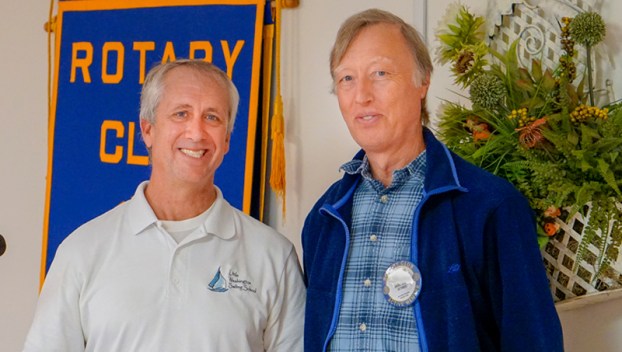 SERVING OTHERS: Washington (Noon) Rotarian Jeremy Hood, right, is pictured with Little Washington Sailing School Director Kevin Clancy during a Rotary Function. In addition to his work as a Rotarian, Hood also served on the board of the nonprofit sailing school. (Daily News)

The Washington (Noon) Rotary Club mourned the death of a club member and dear friend this week, following the death of Jeremy Hood on Sept. 14. Hood brought his Rotary membership with him when he and his wife, Janet, moved to Washington from Texas in 2015.

Since making that move, Hood threw himself into local civic life both through the Rotary Club and as a board member of the Little Washington Sailing School. Though he only spent four years with the local club, his presence made a difference, according to fellow Rotarian Spencer Stanley.

“He used to be the president of the club in Houston,” Stanley said. “His contribution here was dealing with membership, getting to know people and telling them why they ought to be in Rotary. He started an indoctrination program for potential Rotarians so before they even joined our club, they knew what to expect.”

Stanley remember Hood for his infectious personality and as a person that was enjoyable to be around. In the fabric of the club, Stanley says Hood was someone who was always eager to accomplish things, but never one to seek credit.

“He helped our membership efforts,” Stanley said. “Our club has grown from, when I was president in ‘13-’14, we were around 50 and now we’re up to 87, so that should tell you something.”

Like all civic clubs, the Washington (Noon) Rotary offers members a place to network, make new friends and make a difference in the community. Stanley compares the sentiments between members to a sense of family.

“We’re all pretty much service oriented, we all want to help the community, and Jeremy certainly wanted to do that,” Stanley said. “He was very active in both our fundraisers, both Smoke on the Water and our reverse raffle… he just helped anywhere he could. I think it’s just a great loss for a club and a great loss for Washington.”

Hood’s family and friends will gather to remember his life this Sunday.

Comedy comes to the Turnage Theatre stage this weekend

They laughed the first day they read it through. Months later, and just a day before the show goes on,... read more