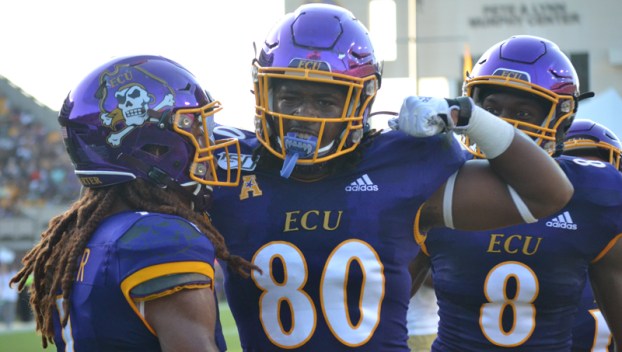 GREENVILLE — It wasn’t always pretty, but the East Carolina University Pirates got the job done and pulled away from William & Mary on Friday night, 19-7.

It wasn’t the offensive outburst many hoped it would be for hometown quarterback Holton Ahlers and company, but a tough Tribe team wouldn’t go down without a fight, even after losing starting quarterback Hollis Mathis in the first half.

On the game’s first drive, the Pirates drove right down the field and capped it off with a 20-yard touchdown pass to Anthony Watley. The catch was Watley’s first reception and touchdown in his collegiate career.

Then, things got tough. The Pirates would not reach the end zone again, but Lou Groza award watch list member Jake Verity had a great afternoon hitting on 4-of-5 field goal attempts. The only miss was from 56-yards out just before halftime.

With the Tribe trotting out Kilton Anderson after a shoulder injury to Mathis, William & Mary put together a nice drive in the second quarter than ended in a touchdown from running back Tyler Crist.

The Pirates would prevent the Tribe from scoring again after that. Despite the victory, there are plenty of things for the Pirates to clean up. In both of their losses to N.C. State and Navy, the Pirates only reached the end zone once, which was the case again in the victory over the Tribe.

“We’ll look at the film, and we’ve got 4 million mistakes we’ve got to get corrected,” ECU head coach Mike Houston said after the game. “But the way the kids competed in the second half, the way they fought to overcome adversity, the way we played defense and the way we ran the ball in the fourth quarter, that’s what you’ve got to do to win ball games.”

Starting running back Darius Pinnix Jr. was inactive for the game against the Tribe, but back up running backs Trace Christian and Tay Williams combined for 162 rushing yards. Despite the Pirates only reaching the end zone once on the evening, they gained 480 total yards and held the Tribe to 260.

The Pirates will have to quickly put the win in the back of their minds, as they get ready for another American Athletic Conference road matchup at Old Dominion in Virginia on Saturday.

Southside 41, North Duplin 32 A back-and-forth affair on Friday night was capped off with two Southside touchdowns to put... read more