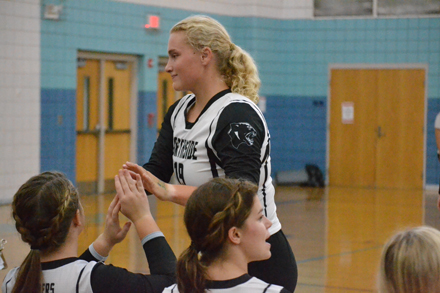 CHOCOWINITY — After a very competitive first set, the Northside Panthers volleyball team downed the Southside Seahawks 25-18, 25-10 and 25-13 on Tuesday night at Southside.

A cross-town rivalry set the stage for a noisy gymnasium, especially early on in the night. Southside led the first set 10-7, but the Panthers made a run and never looked back. In the second, freshman Hannah Baker served the last seven points of set, earning a few aces during the stretch.

“We started off the first set slow, and there’s a big echo in this gym so they couldn’t really hear each other calling for the ball, but after some encouraging words we came together in that second and third set,” Leathers said. “We still have to improve on serve and receive, and we have to communicate more. Sometimes we get comfortable and stop saying anything.”

The win for the Panthers (5-1, 4-1 Coastal Carolina 1-A) is their third consecutive victory and fourth conference win. Their only loss came to Riverside, a team in which the Panthers players said they have circled on their calendars for when the Knights travel to Pinetown on Oct. 3.

For the Seahawks (4-6, 3-4 Coastal Carolina 1-A), they’ve reached the ladder half of their schedule and will face a tough South Creek team this afternoon. Head coach Atyana Starkie said she’s seen some positives from her team this season but they still have a way to go.

“It’s just our confidence that we need to keep the same. We can do a lot of good things, it’s just the consistency of it,” Starkie said. “I tell them all the time, ‘I believe in you, but you have to believe in yourselves.’”