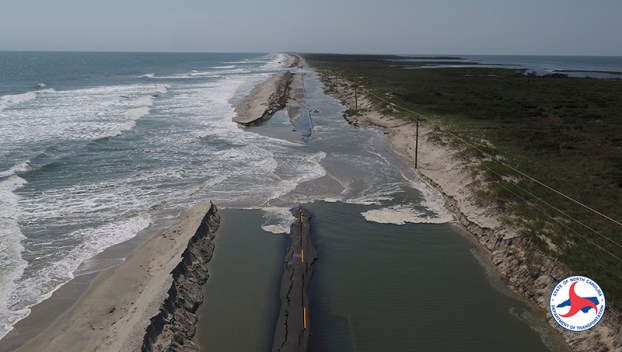 DEVASTATION: Damage to N.C. Highway 12 on Ocracoke can be seen in this aerial photo taken the day after Hurricane Dorian hit earlier this month. (NCDOT)

The North Carolina Department of Transportation is asking for your vote.

The agency isn’t running for office; instead, NCDOT is up for a nationwide award for its innovate use of drones after Hurricane Florence. The contest is America’s Transportation Awards, and NCDOT was named a “Top 12” Finalist. The award itself is the People’s Choice Award and, as one can guess, the people choose the winner.

So what did NCDOT do to garner attention? After Hurricane Florence hit in September 2018, the department captured more than 8,000 videos and photos with drones and were able to use them to direct traffic away from flooded roads, establish detour routes and let the public know what areas were impacted and how bad the storm damage was. The images helped to keep drivers away from dangerous areas, potentially saving lives.

For this contest, a $10,000 prize will be granted to the winner. NCDOT won’t be keeping the cash for itself, however. Any proceeds will be donated to the North Carolina Disaster Relief Fund to help victims of hurricanes Florence and Dorian, as well as other natural disasters.

It was only two weeks ago that the Daily News printed one of these photos, taken in the immediate aftermath of Dorian. In it, the full scope of damage to N.C. Highway 12 on Ocracoke could be seen in an aerial view. Through drone photos, NCDOT is doing the work to keep the public informed — and, in this case, safe.

Anyone can go online and vote once a day, every day, until voting ends Oct. 6. Multiple devices can be used, as well. That means you can vote on your smartphone, your laptop, your desktop, your iPad or whatever other devices you may have.

When it comes to this People’s Choice Award, the phrase “Vote early and vote often” definitely applies. And it’s for a good cause.