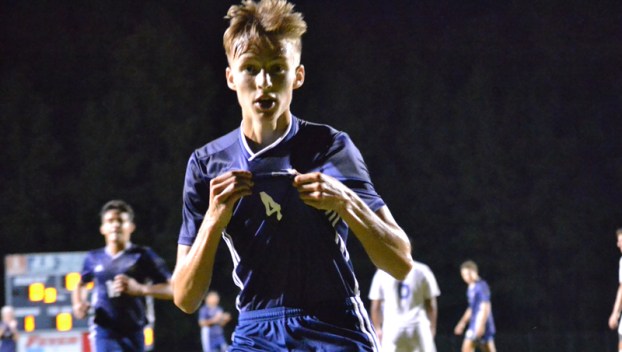 GAME-WINNER: Washington’s senior Dawson Cox shows off his colors after scoring what turned out to be the game-winning goal off a penalty kick with eight minutes remaining. (Mitchell Thomas / Daily News)

For 72 minutes, the Washington Pam Pack and John A. Holmes were stuck in a deadlock. After a handball was called in the box, Dawson Cox nestled a penalty kick in the bottom right corner of the net that was enough to earn the 1-0 victory on Wednesday night.

Washington (7-0-2, 3-0 Eastern Carolina 2A) spent the majority of the game possessing the ball in the Edenton Holmes defensive area. Head coach Jim Kozuch said that’s something they work on in practice every day.

Earlier in the season, the Pam Pack has not possessed the ball as much and has lived off of long passes to their strikers. That was not the case on Wednesday evening.

“You know, I really like the way we played. I thought we moved the ball really well, we probably had about 80/20% possession, their goalkeeper just played out of his mind. That was one of the best goalkeeping performances I’ve seen in high school soccer in a long, long time.” Kozuch said. “We work on finishing and possessing every day. We want 90% of our passes to have a purpose. To be honest I don’t think we were prepared for a team to come in here and challenge them like they did, but I’m glad they did.”

With just over eight minutes to go in the game, the Pam Pack settled for a free kick. The ball was sent into the box and took a bounce off the hand of a Edenton defender. The referee blew the whistle and pointed to the spot. Cox confidently placed the ball, took a few steps back and buried it for the victory.

The Pam Pack continue their undefeated streak and move on to a conference opponent on the road against South Lenoir (5-4, 2-2 EC 2-A) Monday.

It’s a big week around Beaufort County for football teams as they prepare for their first conference games of the... read more