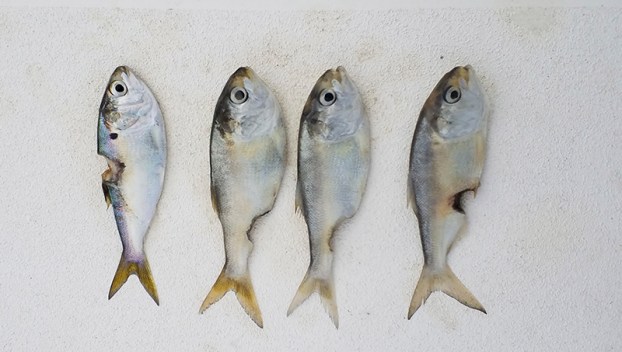 ULCERATIVE MYCOSIS: The ulcers on these juvenile Atlantic menhaden point to A. invadans, a slime mold that causes ulcerative mycosis. (NCDEQ Division of Water Resources)

Nearly 150,000 juvenile fish have died in the latest fish kill in the Pamlico River.

According to the Pamlico-Tar riverkeeper, Jill Howell, calls reporting dead fish in the water right of the Goose Creek State Park beach and at the mouth of Blounts Creek began over the weekend.

On Tuesday, biologists with the North Carolina Department of Environmental Quality Division of Water Resources went out to assess the damage, approximating the number of dead fish at 144,183, with the majority found in the Blounts Bay area. The suspected cause of the fish kill is A. invadans, a slime mold known to kill when the fish immune system is stressed. Those affected were juvenile menhaden. The fungus causes ulcerative mycosis, deep aggressive skin ulcers, primarily in Atlantic menhaden. Since the early 1980s, the disease in estuarine fish has been reported in rivers from Florida to the Chesapeake.

“They all had open sores, lesions,” Howell said. “The fact that there were still fish swimming with the sores means the fish kill might not be over.”

The change of season and resulting fluctuation of water and air temperatures is a contributing factor to the massive kill. In the coming days, fish immunity will likely be stressed more as Thursday’s high is expected to be 96 degrees, yet Friday night’s low is forecasted to be 57 degrees.

“These types of fish kills, especially around this time of year, are common,” Howell said. “Things like this have been seen historically, but that doesn’t mean that it’s normal and it should be happening. It’s representative of a larger problem going on with water quality in the Pamlico River.”

A beloved teacher at Care-O-World Early Learning Center is in need of financial assistance ahead of major surgery this month,... read more