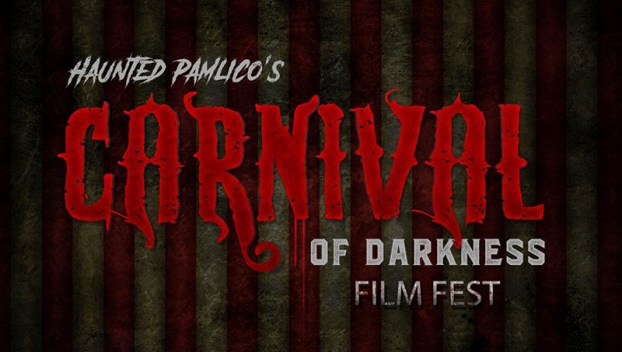 CHOCOWINITY — A new horror film festival is coming to Chocowinity next weekend, screening terrifying flicks from around the world. “Carnival of Darkness: The Haunted Pamlico Film Festival” will be held Oct. 12, in conjunction with the haunted trail event of the same name at Raised in a Barn Farm in Chocowinity.

“We have 21 films from all over the world, and that includes North Carolina,” said festival organizer S. Kruger.

The films selected have been parsed down from a total of 113 entries from 22 countries. A panel of judges has spent the past few months viewing and reviewing the films, narrowing it down based on a set criteria. Kruger says the result was a solid collection of films for screening.

“It was not easy,” Kruger said of the judging process. “We do regret that we couldn’t add more films, and that’s one of the reasons that next year, we’re going to a two-day festival.”

While the films themselves will be the stars of the festival, there will be plenty of other spooky attractions on the sidelines. For one, the horror-themed collection of Junius Swain will be on full display, offering visitors a chance to see and learn about horror memorabilia from the silver screen. Festival attendees can also enjoy the otherworldly paintings of local artist Mandy Lannon, whose works capture both the beauty and terror of human existence.

The event will also include a variety of special guest stars from horror films and television shows, namely Ron Fazio, of “The Toxic Avenger,” Amber Dawn Fox, who appeared on “The Walking Dead” and Kaleab Kurtz, who had a guest role on the most recent season of “Stranger Things.” Recently added to the lineup is J.B. Beverly, a professional musician and writer who is well known in the horror industry.

Rounding out the special guest list is a pair of film-industry professionals. Beverly Horvath, a playwright-screenwriter, and Celestine Davis, of the Down East Flick Fest, are both scheduled to attend.

“We have a silent auction for ENC Shelter Cats,” Kruger added. “The items to be auctioned include an original horror painting by Gary Woolard and a signed poster sent to us by Svengooli himself. We’re going to have music, some surprises, a stilt-walker, a fire eater, everything including Grandma’s kitchen sink.”

The festival runs from 10 a.m. to 4 p.m. next Saturday, with screenings continuing into the night during the farm’s Nights of Fright event. Tickets for the festival are $5 per person or $2.50 with a valid student ID, and those who attend will receive $5 off the price of admission to the Nights of Fright attraction. Tickets can be purchased by searching “Carnival of Darkness” at www.filmfreeway.com.

While activities surrounding the festival are appropriate for kids, Kruger stressed that the viewing area is for ages 13 and older. A public reception for the festival will be held the night before at Grub Brothers in Washington from 6:30 to 8 p.m.

The event is presented by Haunted Pamlico, a developing nonprofit in Washington that seeks to keep the spirit of Halloween alive all year long.

“I think with this festival, we’re getting closer and closer to that goal,” Kruger concluded.

The Humane Society is welcoming fall with an invitation to adopt a dog. October is Dog Adoption Month, in which... read more