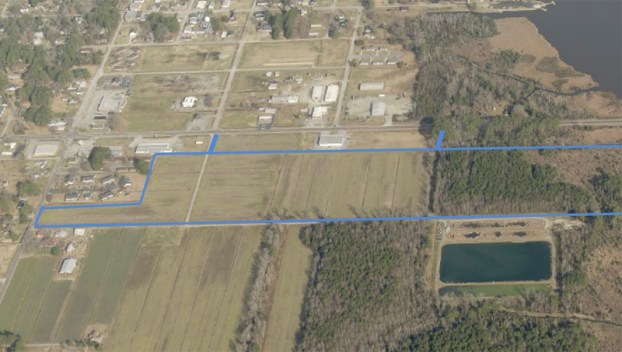 ECONOMIC PROSPECTS: The Town of Aurora, in partnership with Beaufort County Economic Development, is moving forward with plans to develop a 51-acre tract of land that will house the new Aurora Industrial Park. Currently, the town is in the process of formalizing agreements with the businesses interested in establishing sites at the park. (Beaufort County Economic Development)

AURORA — The wheels of industry are turning in Aurora, with plans moving forward for a new industrial park in the town limits. If everything goes off without a hitch, the project could generate up to $11 million in private investment for the town, effectively doubling the tax base of Aurora and creating new jobs in the process.

“The town of Aurora has needed something to give it a jump-start, and what better way than creating commerce?” said Aurora Mayor Clif Williams.

The vision centers around a 51-acre tract of land on the southeast corner of town, with access to N.C. Highway 33 East. The goal is to develop between 11 and 17 sites on the property for industrial use, which will include offices, laydown yards, fabricating and repair facilities for businesses and mining contractors.

“This is a very unique case, because you have businesses associated with the mining operation there, so there are already businesses in the area that need sites near the mine,” said Beaufort County Economic Development Director Martyn Johnson.

So far, the town has seen strong interest from a number of businesses, according to a recent presentation on the project from Beaufort County Economic Development.

In terms of funding, the town has found support for the project from a variety of sources. In March, the Beaufort County Board of Commissioners adopted a resolution of support for providing a loan that will allow the town to purchase the property. While the exact terms of the estimated $450,000 loan still have to be hashed out between the town and the county, the funds will be secured through pre-sale agreements with businesses interested in locating in the park, according to Johnson.

“This is important given the Beaufort County loan, because they don’t want the park to go ahead before there is a pre-sale of 75%, by value, of the land,” Johnson said.

In addition, a $750,000 industrial development grant from the North Carolina Rural Infrastructure Authority will support the development of water, sewer and access roads on the site. A $200,000 grant from the Golden LEAF Foundation will round out the project’s funding, also to be used for infrastructure development. Even including a 10% contingency for the project cost, the two grants are enough to meet the estimated grand total of $950,000.

The end result of this public/nonprofit investment could be as much as $11 million in private investments in Aurora. According to estimates from Beaufort County Economic Development, the development of 17 sites on the land could add as much as $76,182 in tax revenue to the town’s coffers each year, increasing the town’s tax base by more than 50%.

Williams says that, in turn, will allow the town to build up its reserve funds and possibly expand services for Aurora residents.

“Aurora has been shrinking in size, so it’s really hurt our reserve funds, so number one, we want to build those back up,” Williams said. “The tax revenue is going to be a huge help, because there’s a lot of things the town itself needs that we’re not able to get because we’re having to manage our money to a T.”

Hand-in-hand with industry, the park will also bring jobs to Aurora. Estimates from 2018 showed companies relocating approximately 48 existing jobs to the park, along with 20 new positions. Those numbers have only increased since then. As of last month, two companies alone estimated having 100 employees working at the park between them, with 40 of those jobs being new hires.

The hope is that influx of workers will have a positive effect on the overall economy of the town, and southeastern Beaufort County as a whole.

“What we’re hoping is, having more people working in the town of Aurora, that will increase things like restaurant, gas and soda pop sales and things like that,” Johnson said. “Going from that, there’s the bigger picture of hopefully some people who want to live in the town closer to work, so it might encourage some residential developments as well. So we’re hoping this is the spark that ignites somewhat of a development fire in the next 10 years.”

Beaufort County Schools students will have new opportunities to explore the sciences, thanks to a $25,000 grant from the America’s... read more