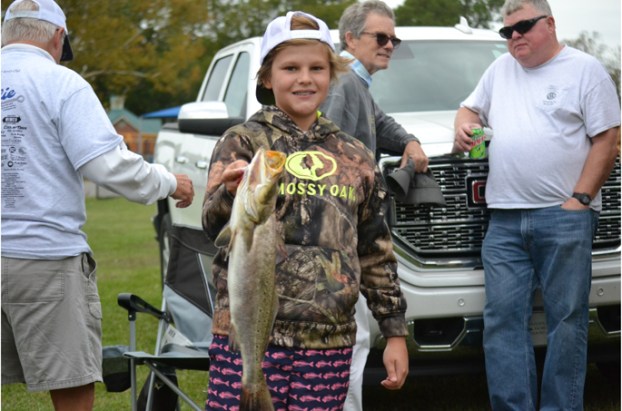 In its 10th-annual year, the Washington Rotary Club held the Charlie Griffin Memorial Fishing Tournament this past weekend at Havens Gardens. Boats and fishermen put the lines in the water around 6 a.m. Saturday morning and the last weigh-in was at noon.

All the proceeds of the tournament go to the local Washington community to help the people in the Beaufort County area.

David McLawhorn and Bill Wall were in charge of the tournament and said there were more than 40 fishermen out on the water for this year’s tournament.

Two categories of winners — adults and children — came out and hauled in a plethora of species of fish including black drum, speckled trout and largemouth bass.

“It’s slowly growing. It has taken on a life of it’s own. It used to be in June, but we moved it to the fall because there’s a little more species to be caught,” McLawhorn said. “Any game fish (is accepted). If you go to North Carolina Division of Wildlife, any fish in that game species section is eligible to be caught, except for children. It’s all fair game for children.”

The top three people with the biggest fish in the children and adult category walked away with prize money. For adults, $750 went to first-place, $300 for second and $150 for third. For children, first-place received $150, second took home $75 and $50 for third.

Wall said that the sponsors around Washington make it possible every year to host the tournament, but said he loves the fact that the tournament is able to help out the community.

“I think the thing that’s most important is what we do for charity,” Wall said. “We help provide scholarships for Beaufort County Community College foundations, and we partner with Angels N’ Camo every year.”

Angels N’ Camo is a non-profit organization that helps raise funds to fulfill hunting and fishing adventure wishes for children in Beaufort County and eastern North Carolina who have been diagnosed with life-threatening illnesses.

The creator of the organization, Lisa Adams, came up with the idea and it came to fruition in 2012.

“I created it to honor someone that was near and dear to me that passed away from cancer, and since 2012 we’ve done 36 adventures,” Adams said. “It’s kind of like an outdoors make-a-wish. It’s tremendous to be with them when they catch their first fish or harvest their first deer or first bear. It’s incredible.”

The organization pays for the trophy catch or animal to be sent to a taxidermist for mounting and give them to option to take the meat of the animal home to eat. They also brought some of the kids fishing on Saturday morning for the tournament.

Around noon, the fishermen gathered around Wall so he could announce the winners of the tournament. The results are as follows.

In the kids division: