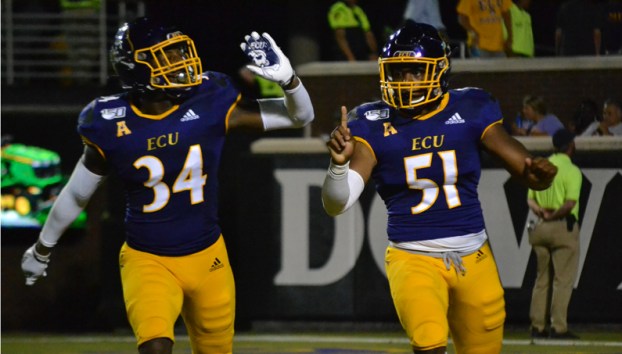 The East Carolina University Pirates are only through six games so far this season, but it has already been a step in the right direction under first-year head coach Mike Houston.

The Pirates (3-3, 0-2 American Athletic Conference) have matched their win total from their 2018 campaign already and they’re only midway through the season.

Given, ECU’s schedule doesn’t get any easier from this point forward, except for a matchup against the AAC departing Huskies from the University of Connecticut. While they are off this week, the Pirates will travel to last year’s AAC champion, the Central Florida Knights next Saturday. Then, they come back home to host South Florida.

Last Thursday night against Temple, the Pirates held their own and scored first on the Owls, but ECU got gashed in the run game late in the game. The Owls owned a 27-10 lead when the lights went out in the stadium and had to wait 30 minutes to continue the game. The Pirates forced a turnover and found the end zone to make the scoreboard look a bit more respectable.

Sophomore quarterback Holton Ahlers has had a decent season thus far, tossing it 185 times this season, completing 98 of those for 1142 yards and six touchdowns to go along with five interceptions. Ahlers boasts a 53% completion percentage thus far. He also has 212 rushing yards on 61 carries with three rushing touchdowns.

The Pirates have struggled to run the ball in recent history, but they have visibly improved this season. There have only been two 100+ rushing yard performances this season so far, but one came from starting running back Darrius Pinnix, who is out battling an injury.

Blake Proehl is leading the Pirates in receiving yards with 315 yards and two touchdowns, but the emergence of C.J. Johnson during the Temple game has given Pirates fans a new reason to get excited. Johnson was a teammate of Ahlers’ at D.H. Conley High School just a couple of years ago and connected on two touchdown passes against the Owls. Senior tight end Anthony Watley also has two touchdown receptions on the season.

Obviously, there have been so improvements to this year’s team, and if they can get a couple of things to go their way down the second half stretch of their season, the Pirates will be bowling for the first time since 2015.