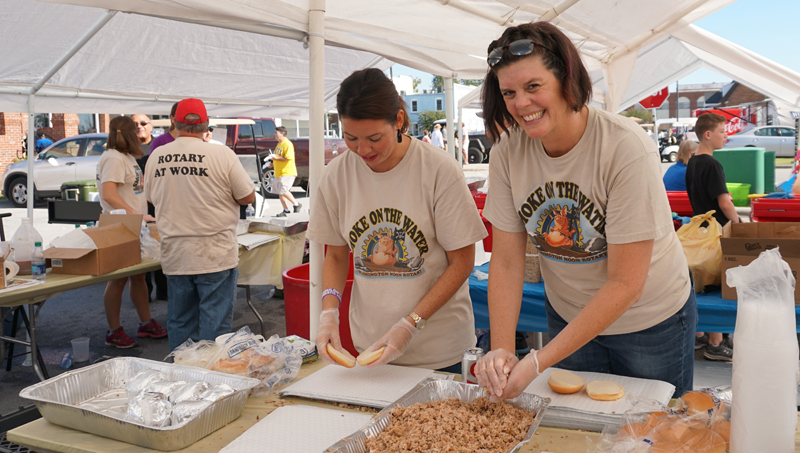 WORKING FOR A CAUSE: Rotarians Valerie Kines, left, and Sarah Parker, right, work keep busy making barbecue sandwiches during last year’s Smoke on the Water. For the past 10 years, the Washington (Noon) Rotary Club has used proceeds from the festival to benefit a variety of local charities and nonprofits. (Washington (Noon) Rotary)

Nothing says eastern North Carolina like a pig on the grill. This weekend, the scents and tastes of traditional barbecue will descend on Stewart Parkway as the Washington (Noon) Rotary hosts its annual Smoke on the Water festival, and organizers expect the event to be bigger and better than ever.

This year’s competition brings in 45 of the top whole-hog cooking teams from across eastern North Carolina and beyond, all competing for top honors in either gas or wood and charcoal cooking events.

The wood and charcoal division serves as a state championship event, with cooking taking place all night Friday and judging kicking off Saturday morning. A special chili competition will add to the flavor Saturday. Top prizes for the barbecue competition and chili competition are $2,500 and $500, respectively. 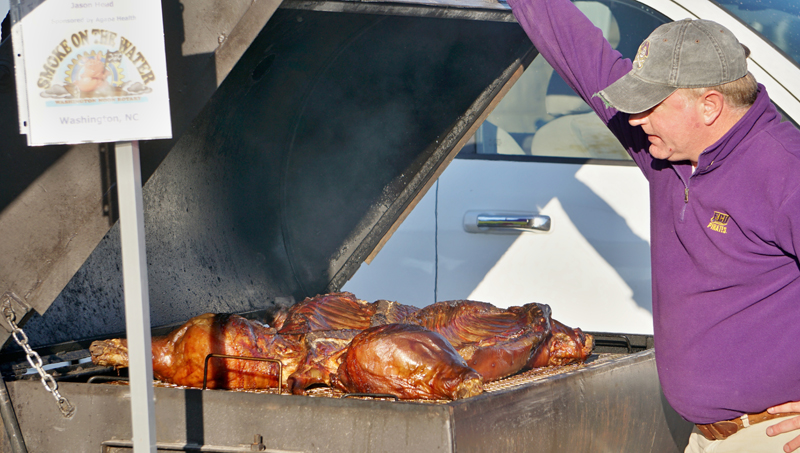 In addition to the main event of barbecue and chili cooking, this year’s festival includes a 5K race to benefit Washington Montessori Public Charter School, a fire engine pull, a classic car show, a beer garden, vendors, crafts and a kids zone.

Rotary Club Member Pamela Anderson, who first organized the festival in conjunction with the Washington Downtown Merchants Association 22 years ago, has seen Smoke on the Water grow considerably since the (Noon) Rotary club took on the event as a fundraiser nearly a decade ago.

“I volunteered that year and wound up joining Rotary because of what they were doing with Smoke on the Water,” Anderson said. “I was so impressed that all the money goes back to charity that I wanted to get back involved. When I got back in Rotary, they made me coordinator again.”

Today, the proceeds from the festival are used to benefit a variety of local causes. Nonprofits in need can submit applications for funds through the club. From the festival’s beginnings, when the proceeds amounted to about $8,000 per year, the overall amount raised has grown significantly. Anderson says that the event has consistently brought in close to $20,000 each of the last four years.

“I love it because it’s such a great team of people,” Anderson said. “They truly believe in service above self and everybody volunteers their time.”

This weekend’s events kick off on Friday afternoon with amusements open from 4 to 8 p.m. on the Washington waterfront. The Rotary Club’s annual Pig Parade will proceed down Main Street and on to Stewart Parkway starting at 6:15 on Friday.

The entirety of Stewart Parkway and all parking lots will be closed to vehicle traffic from Main Street to the N.C. Estuarium from 7 a.m. Friday until 6 p.m. Saturday. For full details on festival, see the Smoke on the Water special section in Thursday’s edition of the Washington Daily News.

County inmates now housed as far away as Concord