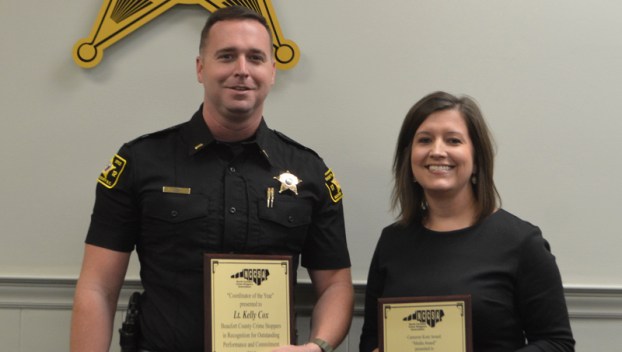 Beaufort County Crime Stoppers recently earned high honors at the state level, and the group is preparing to celebrate a set of awards and the program’s successes at its annual Holiday Ball next month.

The awards came through the North Carolina Crime Stoppers Association, a group that serves as the overarching board of directors for Crime Stoppers programs across the state. While the local Crime Stoppers program earned an award for media engagement, Beaufort County Sheriff’s Office liaison Lt. Kelly Cox was named statewide Coordinator of the Year. In addition, BCCS Treasurer Jennifer Evans was nominated for Board Member of the Year. Speaking about Cox’s contributions to the program, Evans offered high praise for his dedication.

“We emphasized in our nomination the time and the hours he puts in, one being away from his family,” Evans said. “Then there’s all of the events he helps out at, not just at public events, but also presentations he does at churches and civic organizations.”

Cox says the program overall has made a big impact in Beaufort County since it began 22 years ago. Crime Stoppers tips have even helped local law enforcement make arrests in crimes ranging from larceny to drug offenses to high-profile homicide cases. Since the program started in 1997, Cox says BCCS has given out more than $90,000 in award money and recovered nearly $750,000 in property.

As to the media award, BCCS issues press releases and films segments for WITN on a regular basis. Cox said it is because of those media partnerships that the program is so successful.

“Anytime Beaufort County Crime Stoppers has a partnership with the Washington Daily News and WITN, its huge, because we’re getting the word out where it might otherwise be dead ends,” Cox said.

While the awards highlight some of the program’s successes, the group is now looking forward to the annual Crime Stoppers Holiday Ball, scheduled for Nov. 23. The event, which partially serves as a fundraiser for the program, will be held at Washington Yacht & Country Club from 7 p.m. to midnight, featuring live music from the Band of Oz and complimentary beer and wine. Transportation will be provided from the event for those who need it.

Although the event is a fundraiser, Evans says she hopes it will also encourage new people to get involved with the Crime Stoppers program.

“We just want to get a different group of people,” Evans said. “With some of the things we do, like the golf tournament, we see a lot of the same individuals, and we hope with this event, this will pull other individuals who don’t truly understand the program, what it does and who is involved with it.”

Tickets for the Holiday Ball are $45 each and are available at the Washington-Beaufort County Chamber of Commerce, the Beaufort County Sheriff’s Office and First National Bank of Washington.

Anonymous tips on crimes can be submitted to Crime Stoppers at 252-974-6400, and the organization will pay up to a $1,000 reward for information leading to an arrest.