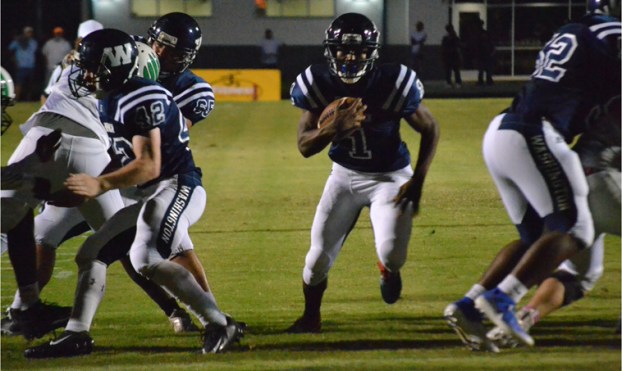 FINDING THE END ZONE: Washington’s senior running back Jaden Hambric finds the hole and dashes towards the end zone for six points in the Pam Pack’s 33-6 victory over North Lenoir a couple weeks ago. (MItchell Thomas / Daily News)

The football season to this point has been a flash. Already through eight weeks into the season and teams are heading into the home stretch of their schedules, but it’s the most important stretch. The conference season is about half over, and it is shaping up to be an interesting finish.

The Pam Pack (6-1, 3-0) is preparing for its last affair with a non-conference opponent in their regular season. In a Hurricane Dorian make-up game from the first Friday night in September, Washington and Conley are both coming off of big wins.

The Pam Pack raced past Ayden-Grifton on Friday night, a team Washington hadn’t beaten since moving into the 2A Eastern Carolina Conference. The Vikings (4-3, 3-0) are coming into this game riding high after knocking off cross-town rival, J.H. Rose in a controversial overtime finish last Friday night in Greenville.

Despite three losses on the Vikings’ schedule, they have played some quality non-conference opponents. All of their losses came from out of conference to Rocky Mount (5-2), Scotland (7-0) and Northeastern (4-3).

The Vikings like to spread out their offense, occasionally with no running backs and five wide receivers. Their quarterback, Nick Hamilton has already surpassed 1200 yards passing completing 54% of his throws with 12 touchdowns and 7 interceptions this season.

They also like to run a lot of draws and screens in their spread look to their big backs and speedy wide receivers.

The Pam Pack has not played a team with this style of offense in quite some time. Kinston could potentially be the most similar, as they liked to run a lot of four verticals and middle screens.

Washington’s defensive front will have to make their presence felt in containing and getting to the quarterback, rather than being the run-stopping team they’ve been for most of the season. The secondary racked up three interceptions to go a long with two scoop-and-scores against Ayden-Grifton. Another defensive performance like that, and the Pam Pack improve to 7-1. 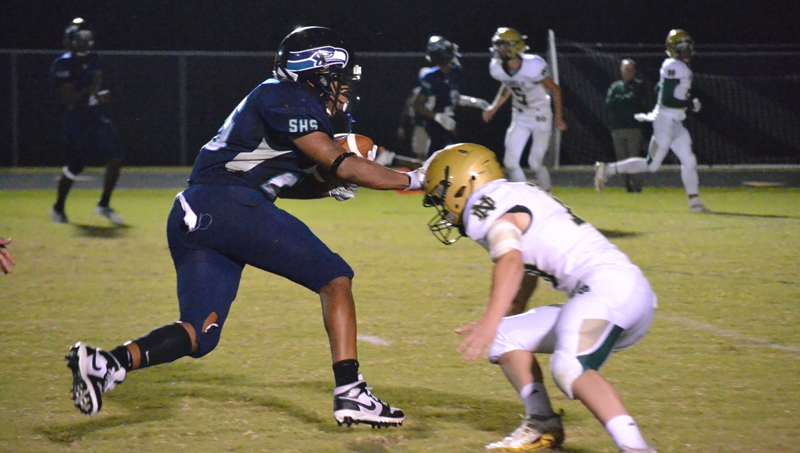 The Seahawks are looking to bounce back and earn their first conference victory of the season on the road against the Hurricanes on Friday night. Southside lost to Tarboro last Friday night, as the Vikings improved their winning streak to 40 consecutive games.

The Hurricanes are coming off of a forfeit win over Jones Senior, who has cancelled the remainder of their season.

Pamlico County (4-4, 3-0 Coastal Plains 1A) has hopped on the shoulders of star running back Savone Tutt, and has been successful. The junior running back recently broke a couple of state records in a game against Riverside, scoring nine touchdowns and being responsible for 60 points in the ball game. Tutt had 462 yards rushing and 620 all-purpose yards in the contest.

Coming off a sophomore campaign in which he rushed for 1,816 yards and 21 touchdowns, the Hurricanes plan of attack involves Tutt carrying the football.

The Hurricanes line it up primarily in Wing-T or a stack look and try to get Tutt out in space. A lot of toss sweeps, reverses, jets, swings and counters are usually going to their star player, but if the defense keys in on Tutt, other players get an opportunity to shine.

It’ll be a tough task for the Seahawks to stop to Hurricanes offense, especially down a few linebackers due to injury. The Seahawks are capable of putting up points themselves. and I expect a barnburner between the two teams, but the Hurricanes have found a groove so far through conference play. It will continue on Friday night.

It hasn’t exactly been the season the Raiders have hoped, but they came out with a win last week against Community Christian in a 48-0 blowout victory. That could bode well for their confidence, but on Friday they will face their toughest opponent of the season. Bethel handed the Raiders a 64-0 loss in the opener, and it could be a similar story on Friday evening.

However, this is not the same Pungo team that took the field in late-August. They have improved and started to gell, despite their lack of players this season.

I expect a valiant effort from the Raiders on Friday, but it won’t be enough to overcome a solid Trojans squad.