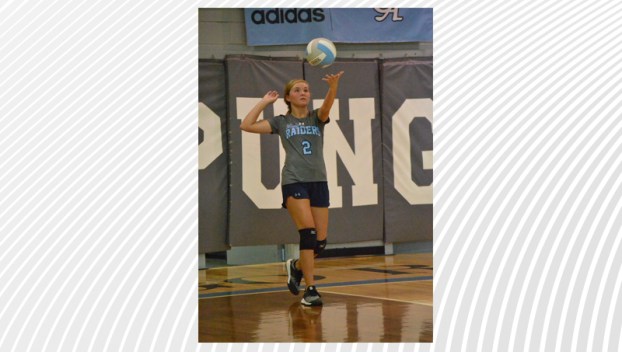 SERVICE: Pungo Christian Academy volleyball senior Brandi Garrish tosses the ball up for a serve against Unity Christian earlier this season. The Raiders are headed into the second round of the NCISAA state playoffs this evening in Wilson. (Mitchell Thomas / Daily News)

FAYETTEVILLE — The Pungo Christian Academy volleyball team went on the road and defeated Northwood Temple Academy in the first round of the NCISAA 1A State Playoffs on Tuesday evening in a full five-game set.

The Lady Raiders reached the third round of the state playoffs last season, before being ousted by Cresset Christian Academy out of Durham.

With the first round in the rear view mirror, the Lady Raiders have an opportunity to match their state playoff performance from last season. Pungo will travel to Wilson on Thursday afternoon to face Greenfield School (5-10, 1-7) at 5 p.m.

There are only two common opponents among the teams in Lawrence Academy and Ridgecroft. Both Greenfield and Pungo won all their matchups against them.

“Overall, this has been a fantastic season. The girls have worked really hard in practice and in games and it has truly shown on the court,” Pungo Christian head coach Melanie Eddleman said after the team’s Tarheel Independent Conference championship win. “I am beyond proud of each of them as I have seen so much growth since the first practice back in August. I am looking forward to finishing up this season strong as we go through the playoffs. I think if the girls really focus and give their all, we will do well.”