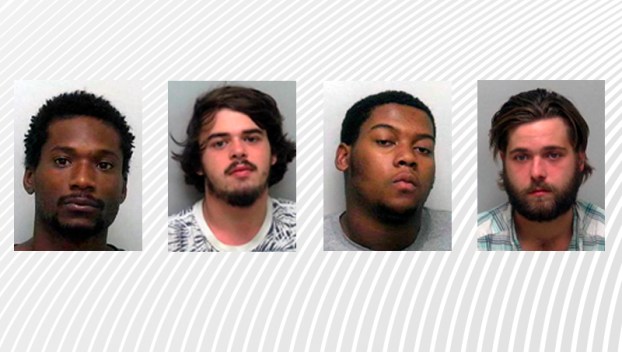 The Beaufort County Sheriff’s Office has charged four suspects allegedly involved in a drug deal that escalated to an armed robbery earlier this month. The robbery took place around 8 p.m. Oct. 7 in the parking lot of the Farmer’s Grill in Pinetown, at the intersection of U.S. Highway 264 East and Pungo Creek Road.

According to a BCSO press release, the four suspects were meeting with three other individuals for a marijuana deal when two of the suspects allegedly pulled guns on the victims. As the victims were held at gunpoint, the suspects allegedly stole a handgun and an AR-15 rifle from one of the victim’s trucks, as well as money from his wallet. No shots were fired and no one was injured in the robbery, according to BCSO Lt. Jim Vanlandingham.

It didn’t take investigators long to track down the suspects, however, as two of them were known to the victims. The next day, BCSO investigators arrested three of the four suspects, recovering the stolen handgun in the process.

Latwan Marcell Jackson, 25, of Chocowinity, Stephen Sparrow, 21, of Chocowinity and Garrett Lee Midgette, 19, of Bath, were charged with one count each of robbery with a dangerous weapon, larceny of a firearm and possession with intent to sell or

deliver marijuana. They were all held in the Beaufort County Detention Center on $50,000 secured bonds.

As the investigation continued, interviews with both the suspects and victims led investigators to the fourth suspect. Kyjuan Jykeim Moore, 18, of Washington, was arrested Tuesday at the Bellamy Apartments in Greenville with the assistance of the Greenville Police Department.

He was charged with robbery with a dangerous weapon and larceny of a firearm. The AR-15 stolen from the victim’s truck was recovered from the residence where Moore was arrested. Moore was also held in the Beaufort County Detention Center on a $50,000 secured bond.