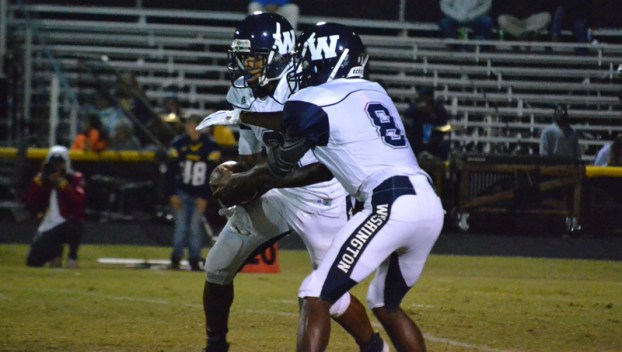 No victories were collected this weekend for Beaufort County High School football teams, but there were some encouraging performances. The Pam Pack erased a 14-point deficit to tie the game late, but the Vikings scored on a fourth and fifteen for the game-winning score. The Seahawks in Southside had a second half lead against Pamlico County that was squandered, and the Hurricanes prevailed 53-36. Pungo Christian Academy dropped their season finale game to Bethel Christian Academy on Friday night.

The Pam Pack (6-2, 3-0) had a difficult time with the spread offense of D.H. Conley on Friday evening. The Vikings took advantage of the height differential of their receivers against the Pam Pack secondary.

However, the Washington run game had a night to remember. Terry Moore touched the football 29 times in the game for 177 yards and two first half touchdowns. Antwone Godley rushed 13 times for 142 yards and three touchdowns. With Godley running the option for the Pam Pack, they are a lethal offense with the capability of scoring on anybody. When Godley found himself in trouble, he found a way to slip from the grasp of Viking defenders and made a play out of it. Godley could very well be the best quarterback in the 2A Eastern Carolina Conference from an athletic ability standpoint, resulting in the highest-powered offense in the conference. The Washington offense currently averages 30.71 points per game, second only to West Craven who is averaging 31.08 PPG through eight games this season.

The Washington defense typically does a fine job, but they faced an offense as electric as their own on Friday night. Hayden Anderson picked up a huge interception early in the fourth quarter, but it didn’t result in points.

Washington turns their attention to South Lenoir (2-6, 0-4), as they travel to Deep Run on Friday night.

The Seahawks defense played extremely well in the first half against Pamlico County on Friday night, but their defensive depth was an issue in the second half. Southside put up 36 points in the ball game, with Desean Moore scoring his first touchdown of the season. Davion McCraw was flying all over the field making tackles on Friday night, doing a really nice job of shedding the blockers and setting the edge defensively on outside runs. McCraw also had a huge reception in traffic that put the Seahawks inside the 10-yard line.

Hundley Stallings had a nice night throwing and running the football. He had two touchdown tosses to Kenjray Coffield and TyNahj Smith to go along with his rushing score. Smith had five catches on the evening, while the sophomore, Coffield, added a rushing touchdown as well.

Southside (3-5, 1-3 Coastal Plains 1A) will now go into a bye week that will result in a victory over Jones Senior, and await the Riverside Knights who come to Chocowinity on Nov. 1.