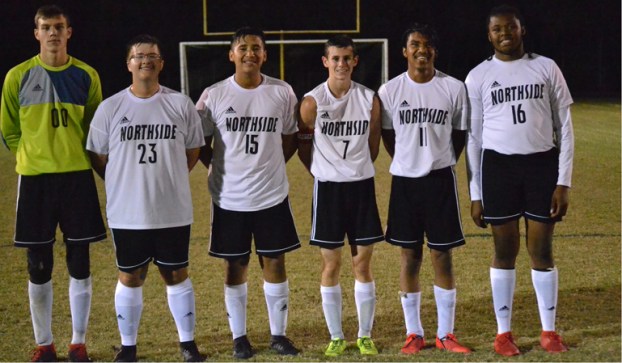 PINETOWN — The Northside Panthers fell short to the first-place Tarboro Vikings, 7-2, Wednesday evening at Northside High School. The seniors on the team may not have gotten the result it ultimately wanted with their record this season, but have laid the foundation of Panthers soccer for years to come.

In her first season as head coach of the Panthers, Jennifer Woolard had nothing but good things to say about her first senior class at the helm.

“The seniors have been great. They’ve been a leader to the others, especially the freshman,” Woolard said after the Panthers’ matchup with Southside on Monday evening. “We’re going to be at a loss with our seniors, because they’ve done a good job of pulling along the younger guys and guiding them. The ones that are coming in and have learned from this senior class will continue to grow for the next few years. This is a growing team, and I’m really excited for the underclassmen, because they’ll do great in years to come.”

The Panthers seniors Ralph Cullom, Chase Smith, Max Geritz, Antonio Windfield, Carlos Vizueth and Roman Castro will all move on after this season, finishing up their season with a slight chance at making the state playoffs.

While the Panthers are on the outside looking in, a 4-3-overtime victory over Riverside last Wednesday night has kept their hopes alive.

The senior forward, Geritz, said despite his team’s record, this season was one he’ll remember.

“It’s been the best soccer experience I’ve had in high school. It’s been all thanks to Coach Woolard and Coach Will. It wouldn’t have been like this if they hadn’t of stepped in and coached,” Geritz said. “Every senior has said something to the younger guys that will make an impact. Hopefully they understand that they can come in, step-up and do the things that need to be done without being asked.”

The Panthers will find out their fate on Nov. 4 to find out whether or not they will participate in the 2019 state playoffs.

CHOCOWINITY — For the first time this season, the Chocowinity Middle School Indians were battle-tested on the football field. They... read more