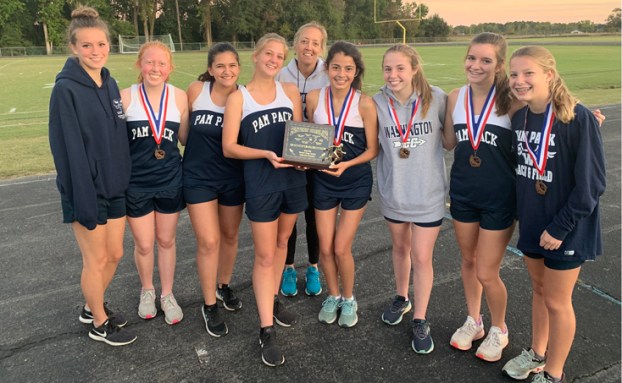 All of the hard work has paid off for the Washington cross-country team. The Pam Pack girls squad won the Eastern Carolina 2A Conference Championship held at South Lenoir High School on Wednesday.

Although they didn’t have an individual winner, five Washington runners finished in the top-10 and two placed in the top five.

Head coach Dawn Landon has been preaching a team effort from both of her teams this season and they certainly got that on Wednesday.

“We’ve been really competitive especially with each other,” she said. “I’m extremely proud of their hard work this season. As the weather started cooling off, we’ve been able to get stronger as a group. I couldn’t be happier with how much effort they’ve given and it definitely shows with my girls team winning the conference title.”

Sophomore Aspen Sommers (27:11) was the fifth scorer for the Pam Pack and finished 10th overall. Washington scored 21 points to take the title and all five runners were selected all-conference, thanks to their top-10 finishes. South Lenoir came in second with 49 points.

“It’s nice to know that all our hard work has paid off,” Frisbie said. “Our team is like family to me and we always support each other. We’re going to keep pushing each other to be better everyday. Hopefully, we’ll be able to have a great race at regionals.”

“It felt good to run well,” he said. “Now, I’ll have a chance to run at regionals and hopefully at states. I think we’ve made a lot of progress as a team this year. We’re continuing to push each other in meets and even in practice.”

Washington’s next meet will be the 2A East Regional championship, held at Croatan High School on November 2nd.

It’s getting down to the nitty-gritty. There are just three weeks left in the regular season of high school football,... read more