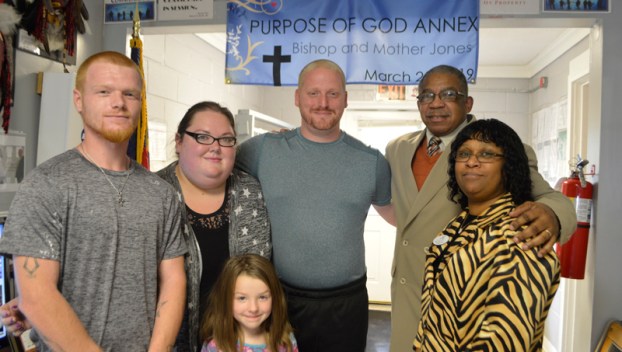 NEW HOPE: For many, such as Dustin Campbell, left, and the Dew family of Katie Brian and Andromeda, center, Project New Hope has been a life changer. They are pictured with Purpose of God founders Bishop Samuel Jones Jr. and Mother Regina Jones. (Matt Debnam/Daily News)

It’s been 20 years since Bishop Samuel and Mother Regina Jones established the Purpose of God Annex. In that time, the couple’s ministry has touched countless lives in Beaufort County of both children and adults alike.

While their after school and summer programs for kids have helped many young people stay on a straight and narrow path, perhaps one of the ministry’s greatest successes has been its Project New Hope. Designed to teach life skills that pave the way to gainful employment, the program has offered many of its adult participants a second chance after finding themselves in criminal trouble.

It’s been a good year for the program, according to Samuel Jones.

“Project New hope has taken off tremendously,” Samuel Jones said. “Since March, we’ve placed 18 people to work, we have a total of seven homes. We had one and now we have six more families in homes. Recently, two weeks ago, we placed another family in a home that was living in a hotel.”

In addition, Project New Hope has also helped pay for three people to get their driver’s licenses back and for one couple to obtain their marriage license and pay for a pastor. That couple was just married Wednesday.

It’s also been a year of expansion for POGA’s Mission Home project. Those who reside in the homes are participants who have found jobs through the Project New Hope program. While Jones said the placement of some of those homes have raised concerns from neighbors, he wants to reassure them that the people who live in them are vetted thoroughly.

“The homes that we put people in are not just for people that have criminal records,” Jones said. “Sometimes people just need somewhere to stay and need some help getting started up. … We’re putting up homes not to demoralize the community, but to lift the equity up and make the moral stance of that community better.”

For one family, the program has helped them find a stable home after a period of instability. Brian Dew, his wife Katie and their daughter Andromeda were having trouble finding a place to live together. Brian Dew, who had pending legal charges, says there were options for his wife and daughter, but he would not be welcome in those places.

“It was a Monday, we were homeless the night before,” Katie Dew recalled. “We literally had nowhere. By the grace of God, we had enough money to stay at a hotel, but they wanted $400 a week at the hotel.”

Unwilling to break up their family, and hearing about Project New Hope, the two took a chance and went to see the Joneses. What they found was a new home, court intervention for Brian Dew’s legal troubles and advice on starting up his own business.

“Within two weeks, Bishop had us in a place to stay,” Brian Dew said. “Our very own camper. We don’t owe anything for it. It was completely free. It was a gift … Everybody’s been extremely kind and generous. It’s just overwhelming. I did not know there were good people left in the world like that.”

Another man, Dustin Campbell, has been with the Annex for 14 years now. He first came as a 10-year-old boy who often found himself in trouble at school for fighting. He attended the ministry’s after school program, and later Project New Hope, which he says helped him turn his life around and calm his anger.

“He’s helped me get my license back and so many other things since I have been here without me even asking,” Campbell said of Jones. “He just did it.”

Currently, POGA is in the midst of a $20,000 fundraising campaign to assist with tuition for kids enrolled in its afterschool program. To learn more about Purpose of God, call the annex at 252-947-1484.

From the Pamlico County Chamber of Commerce The Annual Goose Creek Island Homecoming Play will be Thursday through Saturday nights... read more