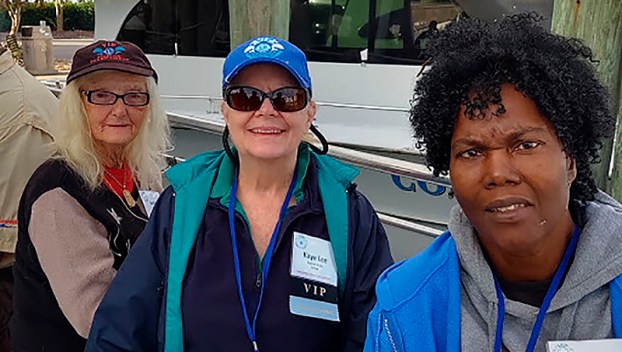 Local Lions participate in fishing tournament for the visually impaired

There are two parts to the tournament. The North Carolina fishermen, fished on Tuesday. The international fishermen fished on Wednesday, including participants from many U.S. states, Canada and more.

Brady fished on Tuesday with the North Carolina Lions. There are two boats and two piers where they compete in the Outer Banks.

Brady took first place on her boat, Crystal Dawn, and received a plaque at a banquet Wednesday night. This year made her sixth (nonconsecutive) tournament, starting in 2009.

Before she moved to North Carolina from Utah nearly five years ago, she had competed to represent Utah State at the tournament. Brady has been a Lion for 10 years and now serves as president of the Bath Lions Club, though she presently lives in Scotland Neck, Halifax County.

The group leader for Beaufort County was Kim Revels, who works for the Blind Center in Washington.

The event, three days long, includes about 500 fishermen (visually impaired) and the same number of helpers (sighted). Brady’s helper was Jackie Spoon of Belhaven. There are also about 500 volunteers, mostly Lions and Leos (younger Lions), who help serve meals and do everything else to make the event a huge success.

The director, Gwen White was the Keynote Speaker and she has headed this event for many years with the help of her Board of Directors. Most of the events in this tournament (meals, dances, educational programs and speakers) take place in Manteo at the huge Lions Club Center there. This was the 37th Lions VIP Tournament.

The Down East Seniors Club held its July 24 meeting at the Blind Center of North Carolina in Washington. Past... read more